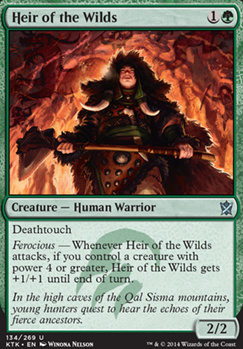 Killing is my Business... Chevill EDH
by NicS18

Actually when I started brainstorming for this deck Wrangler was one of the cards I considered! So when I was piecing this together I wanted to have a solid playset of 2 drops to give me plays during the games I don't have a t1 dork. The three I considered were Kronch Wrangler , Heir of the Wilds , and Frost Walker . My very first iteration of this deck ran 4 Frost Walker and 4 Kronch Wrangler, a 2 drop P4 critter synergized well with Wrangler and kept my pressure up. However, Walker has alot of issues. It has basically 0 use on defense, can't be buffed by Scions or TBR, and cant be effectively protected by Stubborn Denial. Wrangler is another good card but suffers from AetherVial syndrome. You want to open with it but never want to topdeck it. Heir of the Wilds is just accross the board a phenominal card on offense and defense, and gives me 7 deathtouch bodies to push with Scions and Battle Rage. In fact with Scions he buffs himself and becomes a 5/3 fs/t/dt. The other slot went to Bonecrusher Giant. So much versitility for a 2.5 cmc critter

Not sure if you're taking suggestions, I just stumbled on this while looking for KTK jeskai decks... but your land-base is extremely light and you are too light on ramp creatures to run anything less than 24 lands. If you run a playset of Rattleclaw Mystic and Whisperer of the Wilds then you can run 22 lands. Cut Frost Walker entirely and go down to 3x Heir of the Wilds to make room for the ramp.

Also, have you considered Atarka's Command and Dragonlord Atarka? How about Sarkhan Unbroken?

Heir of the Wilds i think would work well. Combat Celebrant could help be aggressive

Vexing Devil could be fun