thrun the last troll
by DrunkenDutch 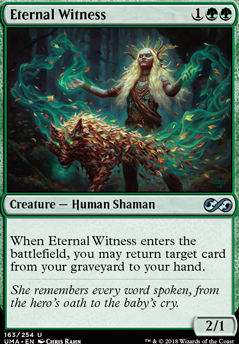 I got Shield of Kaldra

, : Another target creature gains hexproof until end of turn.

Meant to be Melira, Sylvok Outcast before the phyrexian invasion when she was just chilling with Thrun, the Last Troll.

Are you opposed to infect? Also, is everyone else playing on a budget? If they aren't I'd highly suggest switching to an infect strategy. Its fast, cheap green and is a very similar strategy with a much faster clock. Also, the cards/deck could span multiple formats. Things like Glistener Elf , Blight Mamba and Ichorclaw Myr are power houses in pauper...well use to be until fairies and tron got a bunch of new toys...But if you're not into that Thrun, the Last Troll has gotten stupid cheap and is a menace to anything that leans on spot removal and perhaps add in a few Dismember the phyrexian mana only hurts a little ;)

whatqwerty on What are your Favorite Commanders?

Thrun, the Last Troll is my favorite commander. I hate having my cool card removed, or countered, and so Thrun, the Last Troll is the current leader of my mono green voltron deck. That said, it has a bunch of other potential leaders if I want to change things up, that I shuffle into the deck if they are not leading, including Kogla, the Titan Ape and Silvos, Rogue Elemental

I would say if you are looking for just unkillable, play mono green voltron w/ Thrun, the Last Troll. Hexproof, Can't Be Countered, and Regenerate to counter some board wipes makes him pretty powerful in my opinion.

I'd cut pretty much all your creatures. If your trying to make this modern viable. There are just so many better options. Keep Azusa, Lost but Seeking Carnage Tyrant and Thrun, the Last Troll and Lotus Cobra. Primeval Titan is the best green creature in the game if you add in more instans and sorcery Delver of Secrets Â Flip is incredible

I had considered Thrun, the Last Troll but I had decided to run Troll Ascetic because it had a lower CMC.and I didn't think being uncounterable was worth the additional . I had considered Skithiryx, the Blight Dragon but it was fairly expensive at the time but I'll may have to reconsider it after the reprint. I like the interaction of Undying and mutate but I prefer the utility of Malakir Rebirth Â Flip.

I have Muldrotha, the Gravetide in this deck and it never disappoints. 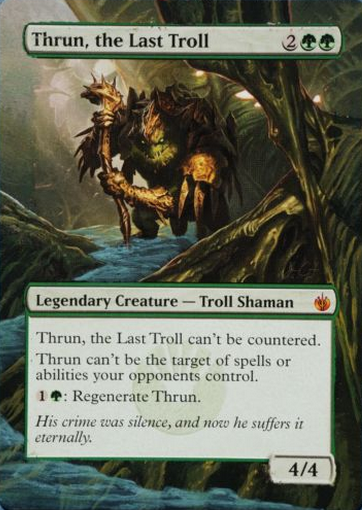 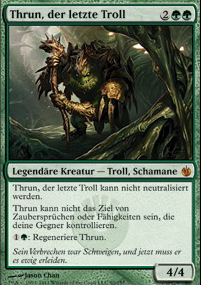 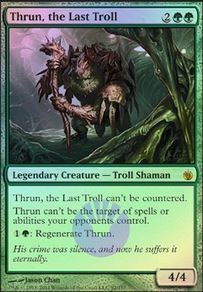