When Dreadhorde Butcher dies, it deals damage equal to its power to any target.

That is the most Rakdos way to win
by Pheardemons 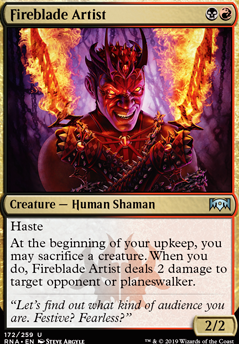 There have been several variants of BRx midrange goblins that actually run Goblin Bombardment without being a fully committed zombardment combo deck.

How has Bladestitched Skaab been for you? I'm not sure whether it would be good enough here.

Headless Rider is a new spicy zombie, might be a fun 1 of?

Pheardemons, I see your point. I think the lists I used to run had more sac targets like Carrier Thrall, Reassembling Skeleton, or Dreadhorde Butcher so I was able to get away wit it.

Something to think about though, you can count on your opponent trying to remove some of your more important cards, and just bank up extra food by sacking them first with Witch's Oven. This lets you sac Cauldron Familiar for other things like Spark Harvest and still return him to the battlefield with the extra food.

zapyourtumor my friend was playing Soulflayer and he would delve Zetalpa and I simply lost whenever that happened. Grasp of Darkness is a thought, but normally he would have hexproof on it as well. Again, it is there for now but obviously I need to adjust according to whatever the meta may come to.

Murderous Rider was there as a catch all for later games since Fatal Push can't hit anything past 5, but it would be taken out. There may be an adjustment with how many Light Up the Stage s I play, with Murderous Rider and whatnot. Something to think about. Thanks for the thought!

Kroxa, Titan of Death's Hunger is another one that I'm going to play when I can find a foil Japanese Extended art, or have the money to afford it. Another way to help with grindy games.

Honestly, Dreadhorde Butcher is a potential as well. But his ability to just take over games cannot be denied. Plus, he's probably one of my favorite cards in Pioneer. It is RARE that I don't like to see him. He can be a serious clock. However, he isn't as synergetic as some of the other cards.

For the longest time, I had Thraximundar as the commander of The Phyrexian Undead until I eventually decided to switch him with Marchesa, the Black Rose who was already in the 99. Now I can actually play and even recur ol' Thrax since he isn't constrained to the Command Zone, and the rest of the deck runs much better with Marchesa than it ever did with Thraximundar.

Originally, the deck was strictly about proliferating whatever I happened to have on the board, then I went almost the complete opposite going SUPER Heavy into Zombie-Tribal, then I decided that wasn't what I wanted to do since it didn't synergize well with my Proliferate shenanigans. About that time was when I made my commander change, and since then it's become more focused on Fling effects attached to my creatures, like Dreadhorde Butcher , Stalking Vengeance , etc.

Admittedly it's a pet card of mine, but Call of the Death-Dweller seems REALLY good in your current deck. Turns Mayhem Devil into a repeated source of removal, and Dreadhorde Butcher into an escalating time bomb lol.

I love demon deck ideas. The only drawback is alot of demons have REALLY shitty negative stuff they do as well.

Griselbrand get this boi in there. he fucks. hard. I'd also def keep the Master of Cruelties and maybe even throw in some Lightning Greaves to protect your heavy hitters. Sire Of Insanity also a fuckin sick demon who works well with top decking if you have Varragoth, Bloodsky Sire out. Demigod of Revenge is also a sick ass card thats easy to play with your basic mana set up. Also maybe consider 1-2 Ob Nixilis Reignited for some late game card draw and variation to keep opponents on their toes.

Also dont be too afraid to lean heavy into some removal/burst, black/red has some great options like Bedevil , Lightning Bolt , Fatal Push and Inquisition of Kozilek

Biggest advice would be to dial back on some of the demons/devils just for the sake of having them. Some of em are trash. For example you could ditch the Tibalt's Rager for maybe some Spike Jester or Dreadhorde Butcher

I'm not so sure about the world tree. Ten mana is really hard to come by, even in formats that support a longer game. Ten mana is half the lands in your deck! Tapping for colorless is actually pretty bad because a lot of the early plays require , such as Kroxa, Titan of Death's Hunger, Dreadhorde Butcher, and Slaughter-Priest of Mogis. Even if you do get your ten mana, you only get three creatures, maybe four with Tegrid. I would pick another card.