Ferocious â If you control a creature with power 4 or greater, counter that spell instead.

Queen of the Walking Dead (Budget)
by multimedia 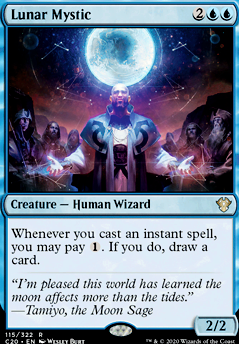 This excellent! Just the feedback I was looking for. Thank you!

I completely forgot about Baral, Chief of Compliance. I agree with removing the Stubborn Denial and Sailor of Means. I do worry about the three U for Archmage's Charm if I splash white but the Thraben Inspector is very enticing.

I will rework it a bit more. Again thanks!

27 non-creatures is crazy high. I understand you wanting counters to boardwipes but there's zero reason to run Cultivate type effects here. I'd also suggest counterspells over something like Akroma's Memorial. Swan Song and Stubborn Denial are 2 really good ones here.

Sakura-Tribe Elder, Wood Elves, Birds of Paradise, Beastcaller Savant (works like morph thanks to haste), and even stuff like Cloud of Faeries/Peregrine Drake (which also work with Morph/Cloudstone) will serve you much much better.

i second Unearth as a must run. it brigs back skaab constantly, id also run Egon, God of Death Â Flip his face side is another solid beater (like skaab) but most importantly he's also a solid turn one mill engin. he's also targetable with unearth which is nice. Rotting Regisaur also fits in this bracket

considering your tying to get down the big fatties, id also look at some protection for them. Stubborn Denial seems pretty well suited to the deck.

theres also probably an argumnet for more of a controling them with the deck Rotting Rats style. with skaab being the midrange wincon.

another possibility for the deck is Narfi, Betrayer King ok weird i know. but hes a relevant lord, an easiy reanimate target that's instant speed. and he's legendary so multiples i the gy are solid exile targets.

finaly you now have access to Persist as a secondary game plan. reanimate big stuff is pretty much what this card is made for,

I'm glad to see Thunderbreak Regent in here! He helps deter control players from slinging target spells too freely. Honestly though, the best option for gruul against control is to get your creatures to stick and hit face fast. So for me that card is Rhythm of the Wild. Make your big dragons unable to be countered, and make them come in with haste or hit stronger tomorrow. I know it's not from Tarkir, but it's pretty powerful. I'd probably run 3-4 of them.

I suppose it depends on whether your opponent plays from their graveyard or not and your curve, but perhaps Burn Away might have a maybe slot? Again high cmc though. Naturalize is always an option for sideboard? And Tormenting Voice is good for digging for answers. It's nice to have options.

For a similar effect as Rhythm of the Wild in Tarkir, there's always Surrak Dragonclaw, but he needs a blue splash and takes a dragon slot. And if you decide to splash blue, then you could run your own control and counters like Stubborn Denial, but now we're getting a bit far from your original concept.