If you control four or fewer lands, search your library for a basic land card, put it into play tapped, then shuffle your library.

Ha, nice, I also definitely play Edge of Autumn just because it's an awesome card. And yeah, it looks like a fun take on the lab man playstyle. I really like that it's not just powering out the combo as fast as possible and you are packing a lot of interaction. It can sometimes feel rough to play against combo-or-die decks, but when someone is progressing, assembling, and interacting, it just feels like you are playing against a deck rather than playing against a card. Heh, long way around, but that's what makes this deck look fun : )

Hey, this deck is neat, but it's not really my area of expertise, so I'll just say Farseek is great, especially if you decide to upgrade your lands, maybe with those dual type snow lands. Obscuring Haze seems excellent in this deck, it gives you a free block and your commander gets bigger still. It's by far the most underrated free spell. I'd maybe swap them out for Warden of the Woods, and Edge of Autumn. Anyways I like what you're doing, it seems really mean, watch out for Voltron lol.

Street Wraith is always a good choice if cycling matters.

A little more fringe, but Edge of Autumn + Flagstones of Trokair could be a cool combo in your deck.

Hello, thanks for your feedback klaudiohmm I really appreciate it

Thank you for your feedback so much, I cannot express my gratitude well enough (:

Hey! I have some suggestions, hope they'll help:

I think iâd be more inclined to run Search for Tomorrow , or Edge of Autumn if i wanted to drop some of the higher cmc ramp... but I havenât really felt it necessary. Feels good where itâs at. 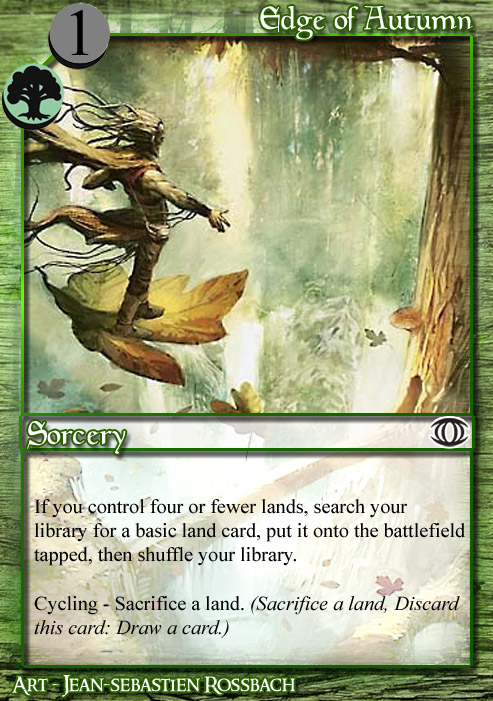