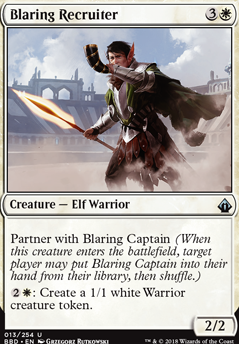 So we are working with these as the basis of the deck:

Interesting idea. Definitely all over the place except for the focus on creatures.

My suggested theme is mana, many of these are middling and up on CMC. Anything that works with ETBs is good too. Aura Shards, Impact Tremors, and Warstorm Surge for instance.

8 of these are warriors and 2 produce warriors, Regna, the Redeemer and Blaring Recruiter.

You can also use the potential for extra combats since some of these are aggressive and love attacking like Blaring Captain, Impetuous Protege, Okaun, Eye of Chaos, Soulblade Corrupter, and Virtus the Veiled.