Exile target creature. Its controller may search their for a basic land card, put that card onto the battlefield tapped, then shuffle their library. 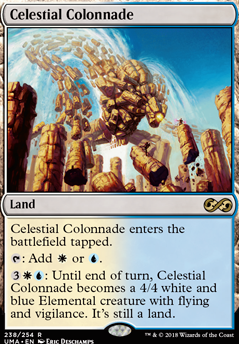 Most EDH decks are going to want 11-ish ramp (extra mana) effects, 10-ish draw effects (that doesn't mean scry!), 36-ish lands, 11-ish interaction pieces (that means 8 things like Chaos Warp , Abrade , Path to Exile , Counterspell , etc., and 3 board wipes like the best of the ones you already have), and then the rest of the deck dedicated to exactly what your strategy is, basically--here that would mean the best available burn spells, some damage increasers ( Torbran, Thane of Red Fell is great), and a few (note I said few!) protection effects.

Lordchaos187 Splashing a third color just for bolt is not worth it, especially when there is already so much good removal in WB colors ( Path to Exile , Fatal Push , Vindicate , Solitude , Anguished Unmaking , Prismatic Ending )