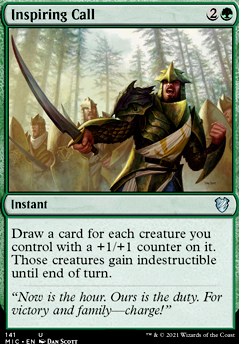 When ~ enters the battlefield, if it is not day or night, it becomes day.

Whenever a land enters the battlefield, you gain 2 life. If that land entered under your control, put a loyalty counter on a planeswalker that has not had their loyalty change this turn.

The back does not cost , but I needed a colour indicator.

This has bugged me since Liesa, Shroud of Dusk was revealed. The 4 main Angels of Innistrad all have an incarnation of them costing , where Y is one of the colours on the colour pie, and X goes 1, 2, 3, 4, 5. But we don't actually have X=1. Before Commander Legends, we were missing 1 sister (who was Liesa) and we were missing . We had Sigarda, Host of Herons for , Bruna, Light of Alabaster for , Gisela, Blade of Goldnight for , and Avacyn, Angel of Hope for . As it stands, Liesa has not completed the cycle.

Finish it. Make a version of Liesa that costs .

When I was messing around with Turbo Fog decks, I had decent results with Sigarda, Host of Herons as a finisher.

How is Abzan Charm working for you?

what about Gift of Immortality for an Aura on Sigarda, Host of Herons ? I use is on Elenda, the Dusk Rose and can be bonkers. Makes getting rid of her permanently a pain.

Also, what do you think about Sigarda, Host of Herons in the sideboard?

Have you ever used Concerted Effort ? I like to run it in my Voltron builds so my board can benefit from any of the keywords on the Auras I have out.