Whenever a creature an opponent controls dies, put a +1/+1 counter on Yahenni, Undying Partisan.

Sacrifice another creature: Yahenni gains indestructible until end of turn. 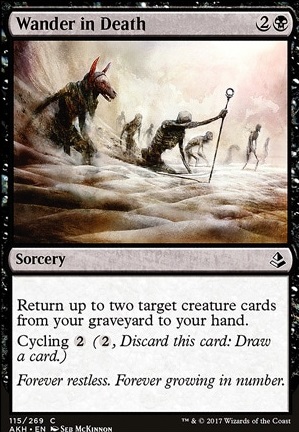 Would you consider putting in Yahenni, Undying Partisan rather than Kels, Fight Fixer? It's a cheaper (mana wise) version of more or less the same effect, whilst also being an awesome attacker after triggering Nev.

Right on, I added the Fatal Push. After investing in Bloodghast, I decided to make it a little less budget, short of Sorin, Imperious Bloodlord (for now). I also temporarily added two Yahenni, Undying Partisan for both the haste and sac opportunity. I honestly am not sure if this card is good or not, but it does help with the 3 cmc part of my mana.

DemMeowsephs on Sacrificing a creature to one â¦

I'm aware that I can't sacrifice one creature to multiple separate abilities, but I was a bit confused about whether I can chose a creature to sacrifice from one ability, and then before that resolves sacrifice that very creature with a sacrifice ability IT has- kind of complicated so let me give an example.

If I have Yahenni, Undying Partisan, and Basal Sliver, can I for example, target Basal Sliver with Yaheeni's sac ability, and then also sacrifice Basal sliver with its own ability, giving me both outcomes? I'm pretty sure the answer is no, but just wanted to make sure. Thanks!

Noire_Samhain on LGBTQ+ in the multiverse

They basically went "No homo" with Chandra and Nissa in the War of the Spark novels, in a turn that peeved off the chunk of the fanbase that is LGBT+. Chandra is still canonically omni/pansexual. They screwed the pooch badly.

Niko Aris is nonbinary, going by they/them. They had a big part in the Kaldheim stories. Yahenni, Undying Partisan is nonbinary, from Kaladesh. And its not just because of their race being aether-elementals, Gonti uses he/him. Phenax, God of Deception is an example of a villainous LGBT+ character. He's attracted to men, though not sure whether he's ONLY attracted to them. But he will curse women he feels are taking "his" object of affection away from him.