+2: Discard a card, then draw a card. If a land card is discarded this way, draw an additional card.

-3: Return up to 2 target land cards from your graveyard to the battlefield under your control.

Lord Windgrace can be your commander.

Lord Windgrace occurrence in decks from the last year 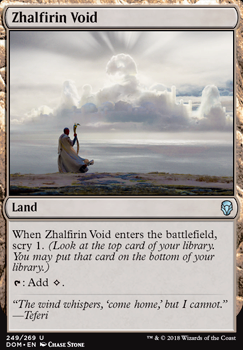 Remaking this deck again after turning it into Lord Windgrace

, Is a challenge since I havent played it in over 2 years.

PhotogenicParasympathetic on What was your favorite play ...

Also, once while playing my Toshiro Umezawa deck, my friend was playing Lord Windgrace

, and cast their commander.

Now, Windgrace is pretty hard to deal with, because he often fuels the next time you've got to cast him, so removal isn't very effective.

My opponent goes to activate him, and I helpfully point out that he has a Strip Mine in play, and shouldn't he use the mine first, so he can get it back with his commander? My opponent agrees, activates strip mine before activating Windgrace, and since he's now passed priority, I respond with a non-delirium To the Slaughter, offering to let him choose aaaaaaaaaany one of his planeswalkers or creatures to sacrifice. Any one at all. Didn't matter to me one bit.

It's not MY fault he only had the one walker in play.

dbpunk on What was your favorite play ...

Omniscience_is_life, I'd like to respectfully disagree. Felidar is not generally a problem as it has to first resolve, second actually wait on the battlefield without interaction, and third ensure you meet it's criteria. At any point, any one of these can change unfavorably for you, making it just a vanilla 4/6. As for S.A., I can see how it gives someone a huge unfair advantage on T1, but this comes with the ire of the table. It will be removed quickly. The nature of the game will balance this out.

shadow63, I see no reason why any of these should be banned. Shaman of Forgotten Ways is the same as Biorhythm, and the rest are basically normal play.

I understand the "social contract" to not interact with lands on a mass scale, because that's like a punch to the gut. You sit down to play a 30 minutes game, you get 1/2 of the lands out and suddenly you are back to turn zero. It is basically the cheap way of conceding. But realistically, the card itself isn't the issue, it's the user casting it. If that player has a history of cramming land wraths in literally every single deck they own, it's clear they do it to create a toxic environment where they want all of the power and control without any of the input and diligence.

However, that being said, if the player uses one or two in a single deck and it is there for a specific reason, that's not so much of that player being a toxic asshole, more so that deck is built to be overtly aggressive and challenging.

For example, in my Grixis Superfriends deck I run three land-lock methods. I do this so I can snuff out interactions with my Planeswalkers, since they are hard to protect.

But in my Lord Windgrace

deck, and indeed all other decks, I don't even run a single land destruction spell, despite him being a beautiful synergy with cards like Strip Mine, which functions with Wrenn and Six, who is like a second Windgrace. Even my Oros, the Avenger deck who is quite literally built around "wraths matter", doesn't run a single one. I could easily turn all creatures into lands and wrath the boardstate entirely, as the newly creature-lands are non-white, but that is horrendously cheap and completely unnecessary.

So I feel it really depends on the deck the land wraths are in, and how frequently the player who builds these decks uses them.

deck is a sort of toolbox, so it has a lot of interactions and synergies based around how effective and efficient my lands can be. Primarily I win through swinging with a bunch of creatures after dropping Craterhoof Behemoth, or occasionally ramping out everything and Exsanguinate the table. Shameless self promotion below:

Thanks for the comments! You are correct about farseek over rampant growth. I don't have many non basics but it is still strictly better than rampant since it gives me the option. I don't have Rancor in the deck since I want the main wincon to be token related. Either by a large attack, Purphoros, God of the Forge damage, or sac to Goblin Bombardment. That's just my personal preference though. Not against swinging in with the commander. Just not plan A. Bloodghast is a great suggestion. I'll have to find a spot for it. I just changed this from a Lord Windgrace

deck so I hadn't updated to add those sac synergies yet. Thanks!

Deadpoo111 on that card you hate

anymore. Not really because I despise what the card does, but because every lord windgrace deck is the exact same thing. It's annoying to face the same deck over and over again.