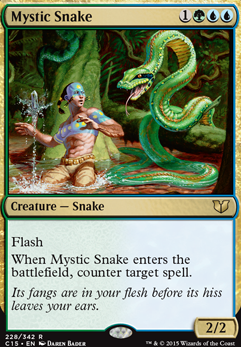 Looks fun! Very straight forward - It relies heavily on the commander being out though. Would be very susceptible to board wipes (unless you had something like a Mystic Snake). You might have misinterpreted AxNoodle's suggestion...I know Primal Surge isn't a creature, but do you realise what will happen once you play that card?

Good idea for the commander though!

Ok, that clears up the pond much more, thank you.

In that case, some strictly good copy/clone targets include:

Let me know if any of these help at all!

Yes cool to see an Ezuri in action! I also like the Elf subtheme, but why no Priest of Titania instead of Maraleaf Pixie (or Immaculate Magistrate)?? This deck needs more turn 2 ramp. If you play a 4 mana commander, you don't want to ramp for 3 mana you want to ramp on turn 2, because after that you can play your captain on turn 3. Farseek, Rampant Growth, Nature's Lore, Simic Signet & Talisman of Curiosity. Another card which I love in my Ezuri is Mystic Snake, because the Snake triggers Ezuri and to counter something important is always good.