Landfall Â Whenever a land enters the battlefield under your control, you may add one mana of any color to your mana pool. 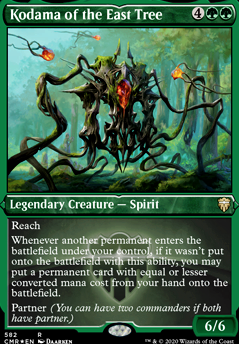 Seems to work with this manabase, although now aggro matchups just got that much harder. Thankfully, Amulet of Vigor mitigates the need to shock myself with Shocklands, and Dryad of the Ilysian Grove / Yavimaya, Cradle of Growth help me to use my Fetchlands without actually fetching. One bonus that I did get is that the Fetchlands combo nicely with Lotus Cobra to produce 3 mana with one land-drop.

Hi tiffanyann, totally forgot to mention Chandra's Ignition, a mid to late-game finisher. Maybe a Devil's Play? #thinkingoutloud. Watch out cutting lands, that Lotus Cobra needs a few land drops, otherwise it is sitting their knitting hydra sweaters. You could make use of Karametra's Acolyte devotion to green or perhaps a Nyx Lotus. My Gargos deck net 15 plus mana mid-game easily with both Nykthos, Shrine to Nyx (fetchable with a Crop Rotation or Expedition Map if needed faster) and Nyx Lotus. Ulvenwald Hydra, cheaper to cast if Gargos is out, also fetches a land, always go for Nykthos. Happy Brewing.

Aesi looks like she belongs as the Commander of this version. You have several excellent cards, much more than the other version, but you forgot Sol Ring . What this version needs now is consider more low CMC ramp?

The creatures who can put a land from your hand onto the battlefield are good, but they're only ramp if you have lands in your hand making them some times inconsistent sources. You want reliable ramp sources to be able to consistently cast Aesi and other higher CMC cards as well as cards with X mana costs which you want to pay a lot of mana for them. Land ramp spells have interaction with Aesi because it puts a land onto the battlefield.

In my last comment, at your other version, I suggested that low CMC ramp could replace little creatures to have more overall interaction with Aesi. These suggestions are examples, they're low CMC ramp sources that you can hopefully cast early. By adding Rimewood Falls then Farseek, Lore, Visits can search for a Simic dual land to help ramp and color fixing. Breeding Pool is the more expensive price Shock land that can also be searched for.

In the above suggestions I've also suggested cards that could be cut. The majority of the cards to cut are higher CMC than the ramp sources. Most of the suggested cuts are worse cards than other cards, they're redundancy that's not needed or have effects that are subpar.

A process that should be a big part of deck building is streamlining. Streamlining is keeping all the best cards at each CMC and cutting the lesser cards. Another name for this process is "cutting the fat" meaning you're cutting out unnecessary cards because you have better cards that do the same thing or are just much more powerful no matter the CMC.

The process also is meant to help the mana curve by cutting redundancy, many high CMC cards which reduces the average CMC of the deck that will make gameplay better. At higher budgets it's easier to streamline because you have access to more cards, but at lower budget you sometimes need to use some lesser cards as filler. Filler is not needed when you have a $400+ budget.

An example of a streamlined creature base using cards already in your version and some cards I've suggested.

Cards that were cut from these examples.

seshiro_of_the_orochi Freed from the Real on a Sakura-Tribe Scout with Lotus Cobra ? Or just the infinite mana with coral helm tribe scout combo and copy anything at any time

jaymc1130 on Should I Keep these Cards â¦

I wouldn't run any of those cards in my Chulane deck. To mana intensive to perform consistently in competitive settings. Good old Lotus Cobra and Cloudstone Curio gets the job done the same way using lands already played and random mana dorks.

If you're not looking for pure raw optimization then I wouldn't change a thing, however, provided you enjoy the way the deck currently functions.

Hey man awesome deck! Definitely a +1 from me!

I have a few recommendations for you:

The first 3 cards mentioned are going to be 3 of the BEST ramp spells in your deck. The last 2 will be 2 of the best draw spells in your entire deck. I think theyâd be a good fit!

I might would even include Sylvan Awakening and Natural Affinity as win conditions! Theyâre very fun!

Could you check out my lands deck? Iâd love some advice from you. It might also give you some interesting ideas! Please read the entire description though. Hereâs the link:

precociousapprentice: gonna copy and paste my write up for Tireless Provisioner as it should answer how Marwyn got Shaman's spot, and it also expands just HOW important Elvish Spirit Guide is.

Different topic, but Lotus Cobra's most remarkable trait is its ability to get you OUT of a Mana-Neutral Line (Ex. Glade/Beast+ Ashaya+ Quirion).

So typically, mana neutral lines let you draw with the purpose of one thing, finding Lotus and ESG. This line typically leaves you with NO mana in reserves. Now, lets see it in practice:

Draw until you hit Lotus and ESG. With Quirion in hand you have 1 floating, ESG gets you 2, Cast Lotus, Landfall; 1 Floating, and then finally cast Quirion. This becomes Infinite Mana and Draw, so you keep drawing and getting one mana and card at a time until you hit something you can bounce Glade/Beast with.

Draw until you hit Lotus and ESG. With Scryb in hand you have 2 floating, ESG gets you 3, Cast Lotus, Landfall; 2 Floating, and then finally cast Scryb. This becomes Infinite Mana and Draw, so you keep drawing and getting one mana and card at a time until you hit something you can bounce Glade/Beast with.

For teaching purposes: The Mana Dork here can be replaced with Lotus Cobra itself. As Scryb Untap+Landfall is also mana neutral

Now. Try to do this with Tireless Provisioner instead of Lotus Cobra . They all need ONE more mana no matter what outside the line. So basically, to initiate any of the above lines, you need an EXTRA 1 MANA set aside on top of the necessary ESG.

To make matters worse, lets go back to the "Rule of 3". Provisioner has 3 cards that hurt it (Ouphe, Rod, and Maze), one of which is a Tutorable creature. It only has 1 line in the whole deck, and while Fetches were left to fortify Lotus (get us dryad as well), at 3 mana we stop seeing lands unless we got a bouncer.

All in all, Marwyn seems to be the best card for this slot taking Shaman place.