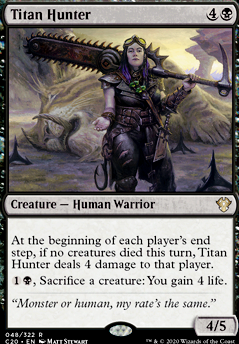 At the beginning of each player's end step, if no creatures died this turn (was put into the graveyard from the battlefield), Titan Hunter deals 4 damage to that player.

, Sacrifice a creature: You gain 4 life.

Beauty and The Beast
by AlistarFiend

Well Coretapper and Magistrate's Scepter is a win con, I didn't want to focus on it because there are many other ways to win by bringing back Avenger of Zendikar once or twice, or sacrificing a ton of stuff to Carrion Feeder, Defiant Salvager, Fallen Angel and Ravenous Gigantotherium. Kessig Cagebreakers and Titan Hunter can rack up damage quite quick too. For this reason I don't think the excessive amount of mana rocks are necessary but some of the tors you included I may work on implementing such as Final Parting because it gets me both Coretapper and Magistrate's Scepter and Wishclaw Talisman because it has a chance to to that. Maybe some of the others if I find cards to replace

Last, the cuts. Fellwar Stone was replaced by a more reliable signet. Outpost Siege was just too clunky compared to similar effects. Titan Hunter and Crimson Honor Guard proved too unreliable at triggering for their mana cost. Charging Tuskodon died because my five drops needed trimming and he's too much of a glass cannon. Cleansing Nova has been replaced by more efficient options. It's modal use rarely came up compared to its clunky mana cost. Ruin Raider has proven to be much more effective at killing me than providing card advantage. Curse of Stalked Prey was fun, but often too low value compared to a signet or equipment. A shame, as I really like the card. Finally, Rite of the Raging Storm and Xantcha, Sleeper Agent weren't used well. Giving my opponents creatures does not guarantee they will use them the way I want. Better to give their existing creatures options, to make it seem like it's more their idea.

Beauty and The Beast

And i think, if you're playing with BW-colours Damn is more flexible than Damnation or Wrath of God Bastion of Remembrance would fit perfectly into the plan, too. Even though he does not produce humans, the Synergy of Xathrid Necromancer in this deck wold be enormous! And Titan Hunter performed in our meta extremly well.

KibaAlpha true, but then I can't use coin counters with Athreos, Shroud-Veiled, and that is part of the value engine. Luminous Broodmoth will make it into the list as soon as I get my copy in the mail, though, along with Bastion of Remembrance. I also ordered a copy of Verge Rangers and Titan Hunter too, and am also considering a copy of Lurrus of the Dream-Den (it's really good but I'm not sure if I want that many reanimation abilities that might take the place of something else that is also needed. As it stands now I have a very good amount of graveyard playability, so we'll see once I get the cards in hand and tinker a bit.