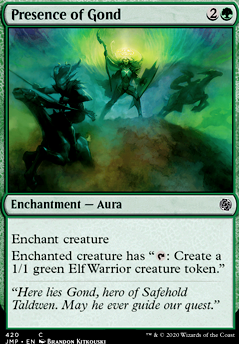 Presence of Gond occurrence in decks from the last year

But you ain't got no cards, Lieutenant Nath...

Typically you don't want to add too many combos into something, BUT, if you are working Tergrid, God of Fright Â Flip into this deck it should solely be because of Nath's ability and the other discard outlets you have. You can farm It That Betrays pretty fast if you're going elves as well. Presence of Gond would be something to add into the elf side of the deck as well and just put the enchantment onto one of your tokens. Lathril, Blade of the Elves for the elf kind of deck would be good as well since elves is your main theme with Discard being the sub-theme. I noticed you did A LOT of changes to this deck taking ideas from the stax side of Nath. While this is a GREAT idea, you dont want to be doing too much. You should have a small package of stax pieces Torpor Orb Chains of Mephistopheles Nether Void Bottomless Pit Necrogen Mists and maybe one or two others including Possessed Portal . I notice you added in Earthcraft squirrels nest; as much as I LOVE this combo, I don't think it works for your deck. The reason being is that you want to swing wide. STAX needs a wincon outside of Torment of Hailfire and taxing our opponents to death. This is why I suggested Lathril instead of the stax set up.

I hope this can help out! -Shadowz

Have you considered Marwyn, the Nurturer, Austere Command, Rishkar, Peema Renegade, Return of the Wildspeaker, Shamanic Revelation, Huatli, Radiant Champion, or Path of Ancestry? Also, if you do put in Cathars' Crusade, consider Devoted Druid as an infinite combo with Presence of Gond.

If your going for infinit combos, Presence of Gond+Midnight Guard is a great rhys include

Maybe I'm missing something, but some of these combos don't seem to work. What does Intruder Alarm, Presence of Gond, and Sliver Queen do? Neither the Elf token nor the Queen share a creature type.

Or what about Omniscience, Dream Stalker, and Sprouting Vines? How does that accomplish anything? Stalker bounces something back to your own hand, then you search for a land?

There are others, but I'm really scratching my head here.