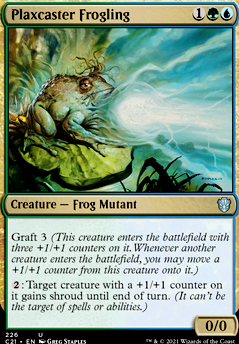 : Target creature with a +1/+1 counter on it gains shroud until end of turn. (It can't be the target of spells or abilities.) 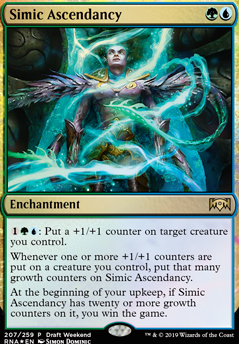 Neotrup on Can you stack multiple replacement â¦

The only replacement effect available is: Graft 3.

Now you have Plaxcaster Frogling entering with 3 +1/+1 counters, so you have 4 effects to choose from. You can pick any 4 of them, but you can't pick Graft 3 again. You'll probably want to choose Hardened Scales or Conclave Mentor , so let's pick the Mentor like you suggested.

Now Plaxcaster Frogling is entering with 4 +1/+1 counters, so you have 3 effects to choose from. Again, you can't pick Graft 3 or Conclave Mentor so you pick Hardened Scales .

doodkyle on Can you stack multiple replacement â¦

Specifically, if I have Vorinclex, Monstrous Raider , Doubling Season , Hardened Scales , and Conclave Mentor in play, then I play Plaxcaster Frogling , can I order the effects like conclave -> hardened -> doubling -> Vorinclex so the frog gets 20 +1/+1, or do I have to choose hardened or conclave then choose vorinclex or doubling?

No Skithiryx, the Blight Dragon? I assume budget reasons, but would be a nice addition for any infect deck. Plaxcaster Frogling can offer single target protection as well as being and making more proliferation targets. Speaking of protection, Teferi's Time Twist can be useful with Ukkima. Also, considering your creatures can get big Greater Good and it's ilk may be worth considering. Hope that helps, unfortunately I can't say what to remove because I'm terrible at that part of building, and it's pretty well done already.

Hey, thank you for your comment and your suggestions Voltaire26 !

I hadn't thought of As Foretold, great option ! I need to test it and find what to replace. But i like !

Plaxcaster Frogling and Sporeback Troll : I didn't build this deck around the + 1 / + 1 counters matter. More attractive in your deck ^^

But that gave me the idea to use other protective spells than counters. Like Steely Resolve, maybe Asceticism, Yavimaya Hollow

But I have to think about which cards to cut ^^

I just started brainstorming my Pako deck today too! Under protection a few cards that I'm looking into are Plaxcaster Frogling and Sporeback Troll, though I'm going more into +1/+1 counters matter than making a hulking Pako so there's some extra utility there for me. Under your free spells section, you should 100% include As Foretold, it can be used on Pako's fetched cards and during your opponent's turns!

I'm looking forward to following this deck as it progresses!