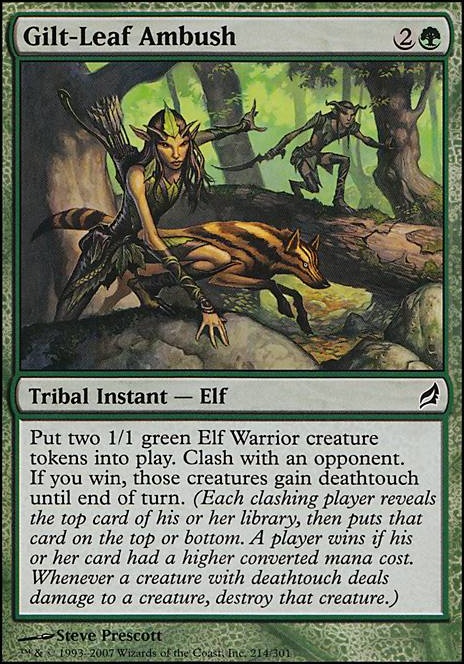 Put two 1/1 green Elf Warrior creature tokens onto the battlefield. Clash with an opponent. If you win, those creatures gain deathtouch until end of turn. (Each clashing player reveals the top card of his or her library, then puts that card on the top or bottom. A player wins if his or her card had a higher converted mana cost. Creatures dealt damage by a creature with deathtouch are destroyed. You can divide combat damage from a creature with deathtouch among any of the creatures blocking or blocked by it.)

Essence of Kiora
by Jaathik 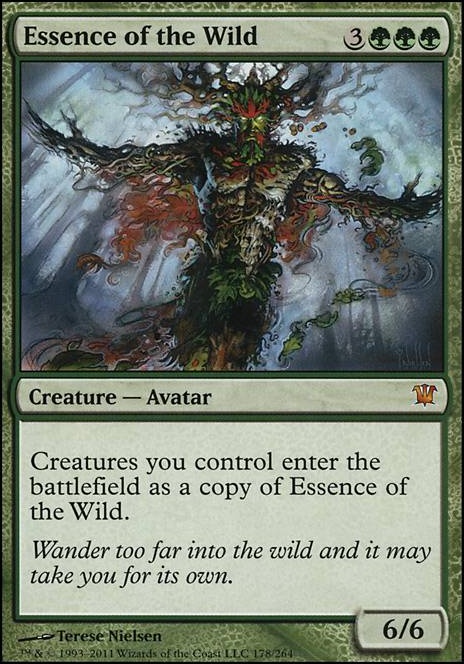 Abomination of Llanowar
by Portalis78 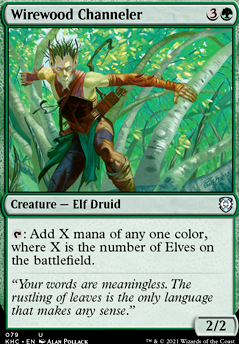 Rhys the builder of elven empires.
by philkillpro

YOU WANT TO GET NUTS!? COME ON! LET'S GET NUTS!

Love the Batman quote, an upvote just for that. A Doubling Season would be fantastic, but I know theyâre pricey. I also like Gilt-Leaf Ambush as a token generator especially if you are thinning forests out of your deck or scrying.

Elves loses a lot of explosiveness without the 1 cmc mana dorks; you really need to play them. Not only do they let you cast your bigger threats earlier, but they also let you flood the board with creatures faster, which works well with your payoffs ( Shaman of the Pack , Poison-Tip Archer , and Dwynen, Gilt-Leaf Daen benefit from large boards, Lys Alana Huntmaster benefits from having lots of mana to cast creatures).

Llanowar Elves , Elvish Mystic , and Elves of Deep Shadow (to help out the black splash) are all inexpensive. I'd cut a mixture of Eyeblight's Ending , Prowess of the Fair , and Gilt-Leaf Ambush to make room for at least 10 of those cards. You can even cut 2 or 3 lands if you have 12 or so mana dorks--competitive Elves decks play 18 lands and still make enough mana to cast their entire hand by turn 3. I'd also recommend you play Elvish Visionary ; like Silvergill Adept in Merfolk, it's one of the cards that keeps the fuel pumping and is just really good in general.

Quirion Ranger It has some combos, but you have more than enough other cards for this, and most are more durable

Caller of the Claw Too situational

Arcane Adaptation most of your creatures are elves, and the ones that aren't don't necessarily need the buffs. Not a guaranteed removal card, but it's only going to be useful on rare occasions

Overrun Not really necessary, you have other cards to achieve the same or greater effect.

Dwynen, Gilt-Leaf Daen other than the buff the second ability isn't incredibly helpful and it won't trigger Ezuri

Protean Hydra It's not likely to die in combat, so it's pretty much just a big creature. Your other hydras are better

Swan Song, Counterspell, Disallow; With so few counters, these cards are more likely to show up when you have absolutely no use for them rather than when you need them. You're better off cutting them out to slim down the deck.

Uncage the Menagerie way too specific, and way too much of a gamble. your best search would be 3 and you would only search through 3 cards.

Urza's Incubator Most of your elves are pretty cheap, so this may end up being pretty dead, as you may just end up with a bunch of unused mana. Your call on it though, as it's still somewhat useful

Door of Destinies This is slow and honestly the lack of other utility makes it somewhat dead. still has potential, so up to you.

Braingeyser You have other draw, and not being instant speed or triggered off creatures means it may not be as useful

you have a plethora of low drop mana dorks, so you may want to slim those down a bit

I would change the format to modern as this isnt standard. Secondly, go all in on elves. Elvish Champion Imperious Perfect Masked Admirers Sylvan Messenger Lys Alana Huntmaster Reclamation Sage Gilt-Leaf Ambush. If you can afford to get good green/black lands you can open up a world of good carda like Thornbow Archer Shaman of the Pack Prowess of the Fair Elves of Deep Shadow Eyeblight's Ending Nameless Inversion