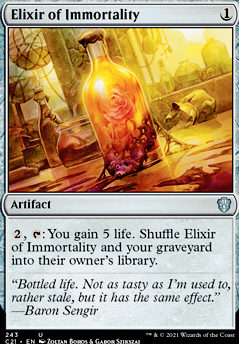 , : You gain 5 life. Shuffle Elixir of Immortality and your graveyard into their owner's library.

enpc on Nivix Guildmage as a second â¦

Most people are familiar with the classic Isochron Scepter + Dramatic Reversal infinite mana combo, however I have been wondering about running Nivix Guildmage as a backup to this in my Kenrith, the Returned King deck (King me! King me!). The main reason for this is that the deck has a very heavy reliance on Kenrith once it has assembled infinite mana to either draw to a win condition or pump creatures and turn sideways. In fact, every combo based win condition has to go through Kenrith.

This is fine for the most part, as having him as my commander means that I should have access to him most of the time (especially with infinite mana available). however, the thought of including Nivix Guildmage was two fold - the first was that he acts as an infinite mana combo piece with Dramatic Reversal, but also becomes an infinite mana sink to either copy any other spells in hand as well as loot the entire deck (which with infinite mana and Elixir of Immortality can form other win conditions).

The question is, is it worth making a slot for Nivix Guildmage, or are the odds of not having access to Kenrith low enough that it's not needed?

How is this competitive? No Laboratory Maniac no Thassa's Oracle no Elixir of Immortality How am I supposed to win?

Poly_raptor yeah I didn't mean what to cut for the urborg since that can just be a land shuffle.

Elixir of Immortality is a bit of a pet card of mine tbh. I just find it a nice cheap include that helps me handle mill strategies as well as keep me from decking myself in protracted games. I will consider cutting it for sure though! Any other cards stand out?

Thanks for the feedback

Hmmm I guess for Urborg you could simply swap it for one of your snow-covered swamps.

Is there any particular reason youâre running Elixir of Immortality ? I think that could be cut

bradtheimpaler13 you can change the looks of cards on tapped out by getting altar codes. Just look up altars in search and you will find it I do believe. I forget how to change it every time and have to look it up again lol. Thanks for the comment.

I do have Elixir of Immortality that lets the deck reshuffle âinfinitelyâ so I could get it back anytimeâ¦ however I have been looking to get rid of Urborg, Tomb of Yawgmoth so maybe Iâll switch it and do some play testing. Thanks for the suggestion.