, : For each creature token you control, create a token that's a copy of that creature. The Song of the Conclave
by Wildsong

Big and Tall store
by Lisliaer 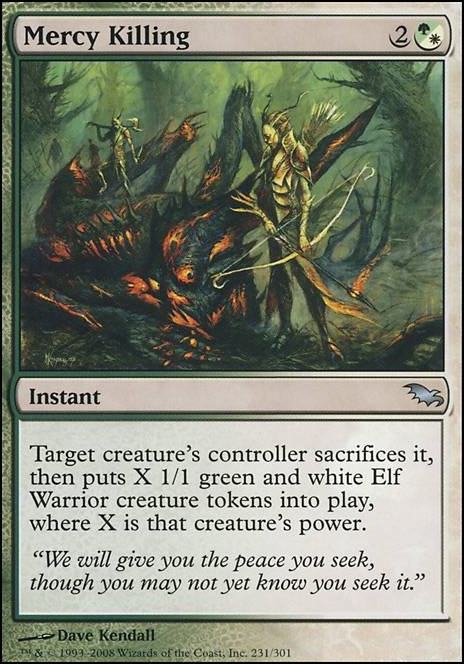 Your commanders strength lies in combat and your colors in fast aggressive and overwhelming force, in short I would play it similar to Edric, Spymaster of Trest but with less politics and more face smashing. Use green to ramp up mana fast, fueling future big plays with red to aid in haste and repeated same turn attacks. Your commander should net you enough cards to pursue both.

With haste in mind I would look more into more mass haste effects like Fires of Yavimaya and Fervor to keep the assault coming, there is no reason a creature just cast should not net you a replacement card in the same turn. I also recommend overrun effects like well, Overrun, Xenagos, God of Revels and similar to flatten your foes and any defenses they may have to prevent chump blocks and keep the cards flowing.

With your strong ability to card draw I recommend more lands probably around 36 minimum and spells to get those lands into play rapidly, you should ideally be able to cast two to three spells on each of your turns. Some other good ramp ideas are Nature's Will, Druids' Repository and Sword of Feast and Famine or similar, combine with Aggravated Assault if your feeling brutal.

I like tokens but I don't think your commander is consistent enough with tokens to really be a rewarding strategy compared to Rhys the Redeemed or some similar token commander. Cards like Wolfbriar Elemental still have a place due to generating an instant in tribe army without the need for support cards like Parallel Lives and Huntmaster of the Fells Â Flip is just fine since hes in tribe and is a pretty good werewolf even without tokens.

Maybe you could add Rhys the Redeemed? He can help populate the field. Also while you're doubling tokens Second Harvest would be great as it's an instant and doubles all tokens.

Good luck with the deck! <3

If they didn't want me to use Rhys the Redeemed, Terastodon, and Mirrorpool to destroy their lands, my opponents shouldn't have Cataclysmed and Cataclysmic Gearhulked in back-to-back casual commander games played in a literal Arbys.