Ayara the first Reanimator
by RedBullMan2 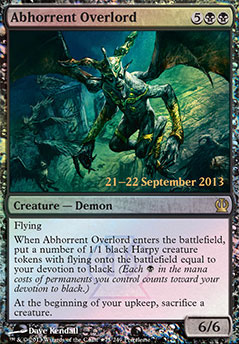 Thank you very much your feedback and suggestions.

I really plan to cut out Breeding Pit and Aphemia, the Cacophony , I just feel I need more token factories and those are my only possibilities right now. Ophiomancer and Bloodline Keeper Â Flip are brilliant cards for my deck, unfortunately I don't have money for them right now.

Ghoulcaller Gisa is a good call, but I really won't have big power creatures, I could sacrifice only 0-1-2 power creatures, and for 5 mana it's too much from a creature without ETB effects.

I don't want Glaring Spotlight and Daring Fiendbonder in my deck, since these cards are for attack support. I don't feel like attack at all with this deck. Probably all my creatures will defend my health and my PW's and they will be sacrificed before the summoning sickness wears off.

I made some changes tho, some cards arrived, what I ordered previously: Sword of the Animist instead of Sword of Body and Mind

Crypt Ghast instead of Solemn Simulacrum

and I took off some "targeted removals" for more Damge//Gain Life effects like: Blood Artist , Bontu's Monument and Vindictive Vampire

For a test deck you already seem to have a lot right. In terms of improvements you can make, I would definitely cut a few cards. Breeding Pit and Aphemia, the Cacophony are both extremely small impact token creators that take a long time to get considerable value, specifically aphemia who does nothing when faced with graveyard hate and likely won't have many enchantments to target in the first place. I would replace these with Ophiomancer , Ghoulcaller Gisa , and maybe Bloodline Keeper Â Flip. I would also remove Sword of Body and Mind in favor of better protection at a lower cost, since its attack triggers are mediocre at best. I would recommend adding a few equipment pieces that give hexproof and indestructible, so that ayara can stick around during boardwipes and drain lots of life. Finally, two last cards I would attempt to make room for are Glaring Spotlight and Daring Fiendbonder .

I would recommend Door of Destinies for any tribal deck, Ghoulcaller Gisa would be a nice add because of the sacrifice sub theme you have going on. You could add Triskelion as another win con. Nim Deathmantle is decent as well because it allows you to spam etb effects

the real commander is Ghoulcaller Gisa

Hello again FenIsABasicSwamp. Not sure if you remember me, but I was the one that was building a Haakon deck around the same time you were (a little after). I also had a GoT theme but went more discard. I've been out of the magic scene for a bit but I was coming back to check out your deck because I am trying to revamp my version. I am still amazed at this deck as it truly does everything that I love in Magic. If I could upvote this twice I definitely would. I have some questions for you if that's alright.

1) Why Wasteland over Strip Mine? Why not both?

2) How relevant has Emergence Zone been?

3) Why fetches in a mono-colored deck? I understand filtering, but you only play two and it seems you have a lot of draw.

4) Has K'rrik, Son of Yawgmoth earned his place? Also, how do you supplement the lifeloss? I see some lifelink (and he has it as well) but have you ever needed to worry about the life lost from using him? Do you try to win before this is a problem?

5) Is Abhorrent Overlord's ETB make him more attractive than something like Endrek Sahr, Master Breeder or Ghoulcaller Gisa? How badly do you need tokens for fodder?

6) Is Bitterblossom not worthwhile for the Contamination combo? If not, how come? I see Winter Orb in the sideboard so it seems like you may want to lockdown in some cases to ensure the deck gets to the mid-to-late game.

7) I know that Sidisi, Undead Vizier can be a repeatable tutor, but how come you don't play more tutors like Vampiric Tutor, Imperial Seal or even Increasing Ambition? (Unless money is a factor)? Also, why no Razaketh, the Foulblooded? Especially with the token generation factor.

8) Has Ghirapur Orrery ever backfired and helped an opponent(s) more than it has helped you? Same question for Lifeline and Tombstone Stairwell.

9) Null Profusion is a card I've always meant to try, but the limit of two cards has always deterred me. How has it played for you? Staple? Needed? Just okay?

10) I'm SURE I'm missing something with Yawgmoth, Thran Physician, but he seems "off" to me in your list. You have enough draw to not worry about losing life and sacking a creature that can be sacked to other things. What does he bring to this kind of build?

11) Is the dredge from Stinkweed Imp needed? Do you constantly dredge whenever you can or is there a time and place?

12) What are the cards you mainly go for when you transmute Fleshwrither? Is it not easier to replace this with Grim Tutor? Does the fact that he's a creature make him more appealing?

13) Have you ever named zombies with Conspiracy for Cryptbreaker? Do you just use his ability to get you zombies? Is his draw worthwhile even if it seems slow for a non-zombie dedicated deck?

14) Has Ulamog, the Ceaseless Hunger's cast trigger been enough non-creature removal? I saw the comment about Feed the Swarm so I won't suggest it, but what about Oblivion Stone, All Is Dust, and even Scour from Existence? If they're not needed, how come?

I read your Bio. I understand that your specifically chose not to use some of the cards and combos I've listed here. I hope that my questions come across as curiosity, not "you should do this and do that."

I know I've asked a lot of questions in this on comment, but if you could do me one more thing. Since you like underrated themes and/or commanders would you be willing to take a look at my Rakdos the Defiler deck? He is one I built early in my Magic career, purely for a theme, and without a template. He has become a powerful deck since and I'd love to hear your thoughts!

Horror, Carnage, and Annihilation. All are Rakdos..

The Court of Locthwain

And what about Ghoulcaller Gisa or Nim Deathmantle. She provides you with more and more go-wide creatures, each triggers with Ayara... And Nim Deathmantle an Altar can go I infinite with either Grave Titan or Wurmcoil Engine.

griffstick on Need a Commander for my â¦

Ghoulcaller Gisa. I think this is gonna be fun on a budget. With cards like Supernatural Stamina, and Undying Evil to add some tricks.