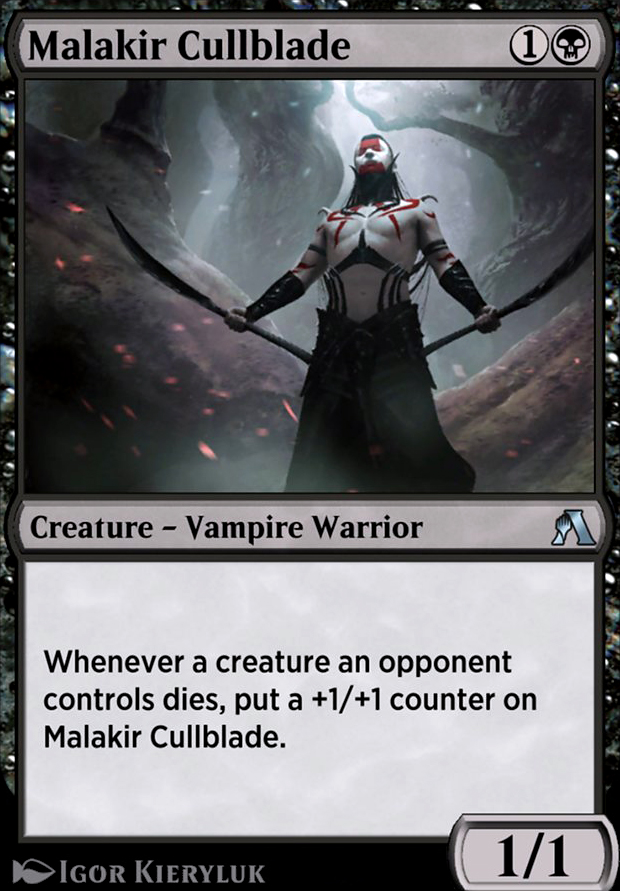 Whenever a creature an opponent controls dies (is put into the graveyard from the battlefield), put a +1/+1 counter on Malakir Cullblade. 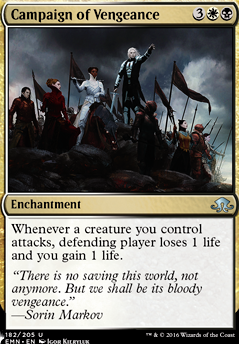 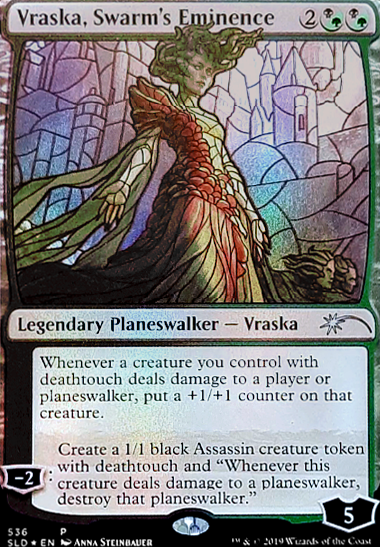 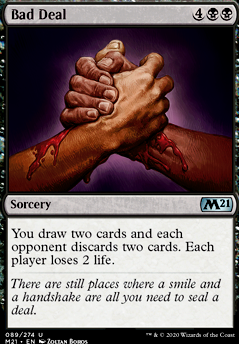 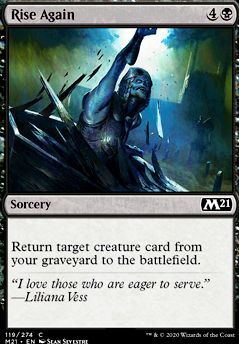 Cordial Vampire would be pretty much a strict upgrade over Malakir Cullblade .

Magmasaur might be a decent keep. It at least works well with Marchesa. Malakir Cullblade , Maulfist Squad come into play with counters on them. Mer-Ek Nightblade offers some good support.

My suggestions for cuts are plentiful. However, Kresh the Bloodbraided comes to mind immediately. Reyhan, Last of the Abzan would be good, Ob Nixilis, the Fallen is great, Rockslide Elemental is similar to Kresh, Taurean Mauler is another Managorger, and Yahenni, Undying Partisan and Malakir Cullblade, with even more similarities to Kresh, may fit well with your flavor. Curse of Stalked Prey could help, alongside Curse of Predation, some mana rocks would do you good, Apocalypse Hydra, and many other hydras would be decent finishers, Kalonian Hydra takes the cake though. Armorcraft Judge is nice, along with Inspiring Call, Pelt Collector and Experiment One, Champion of Lambholt, maybe Heroes' Bane, Ravenous Slime, Rubblebelt Raiders, Deus of Calamity, Scute Mob, Sporeback Troll, Tuskguard Captain, Vinelasher Kudzu, Soul's Majesty, Falkenrath Exterminator, and Stromkirk Noble?

So that's a few suggestions. Want me to propose cuts as well?

I would replace Blood Seeker with Suture Priest as it does the exact same thing, same CMC, same ease to cast, and very cheap to purchase.

Desecration Demon isn't really doing much here. His whole theme is to have a cheap 6/6 flyer that an opponent can stall out to prevent it from attacking them. But the cheap is irrelevant because we're playing kaalia. So let's expand on its secondary purpose, making an opponent punish him/herself to stop you from doing something you really lack, card draw, with Indulgent Tormentor

Mad Prophet is honestly not a good card. Its 4CMC to replace itself. For better card draw that you can cheat out, consider Bloodgift Demon. It is also a very political card for EDH.

Malakir Cullblade doesn't fit the theme of this deck. Malakir relies on your opponents to let him grow into a threat when the theme of this deck is to cheat out creatures that are already threats. Deaths usually don't happen unless you're dealing with a sacrifice themed deck. Instead, consider Strionic Resonator This card is also 2 CMC and is fantastic in this deck as you already have a lot of triggered ability creatures and more importantly, it works with Kaalia allowing you to go from cheating 1 giant creature for free per turn to cheating 2 giant creatures for free for 2 mana of any color.

I would replace Wild Guess with Boros Charm. It is just too good and versatile not to have, especially in a deck like this.

Vampire Friends for Love and Justice

This looks pretty good! I would like to suggest the following vampires for you. Some of my suggestions are a bit more expensive (and I know you want to keep this deck as budget as possible). The only reason I am suggesting them is that they are great value in your deck and can truly be game-changers for you (imho):

Hope this helps any. And should you have the time and inclination, I would appreciate any suggestions you might have for one of my EDH decks (just pick one (or more)). Happy brewing and playing!