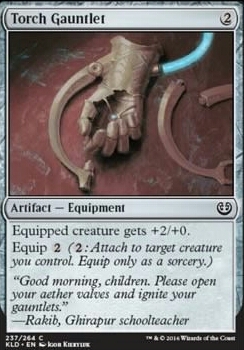 The Red Shirt That Survived
by GenTorgal

Hey Struyk, what an awesome deck! I didn't realise that there were so many unblockable creatures in standard at the moment, it really opens the way for all these fun decks.

I immediately thought of buffing those unblockable creatures to deal massive damage while spells like Dive Down, Curator's Ward or Shalai, Voice of Plenty together with Siren Stormtamer would most likely offer you a lot of protection and a way to close out the game quickly. Standard doesn't give great access to hexproof creatures at the moment which is the other way this might work, just like the modern bogles deck, the best one being Slippery Scoundrel which is very unreliable.

The one enchantment I really love in this deck, and doesn't even require any protection since it doesn't put that big a target on itself is Curious Obsession, in my opinion the strongest aura in standard at the moment. Put it on a one drop unblockable turn 2, and get a card out of it immediately. The on disadvantage of aura's is that they tend to be 2 for 1's if your opponent can just kill the creature, but with Curious Obsession drawing you cards, that downside is minimalized. Prodigious Growth is a rather funny one, but probably not good in this deck since you have to heavily splash for it since it costs double green.

Other than aura's that have their disadvantages, you can also look at equipements in order to increase the power of your unblockable creatures. Torch Gauntlet, Marauder's Axe and Forebear's Blade are very basic equipment that just increase the damage a lot. Rogue's Gloves just gives some some nice value, but is inferior to Curious Obsession in my opinion. Some equipment that do both are Prying Blade and Dowsing Dagger  Flip, especially the Dowsing Dagger  Flip is great since your opponent can't do anything with the creatures since yours are unblockable.

So in conclusion, I would cut the creature count down to around 20, and keep the ones that don't need other ones to be unblockable. This would probably mean that I would cut Combat Celebrant, Warkite Marauder and probably Tetsuko Umezawa, Fugitive. I would also cut Ovalchase Dragster. Then I would add around 8 Buff cards, 4 Curious Obsession and then some equipments, and fill all leftover spots with cheap anti-removal like Negate. This way your deck can definitely race other decks, while not giving your opponent a lot of room to interact. You can also consider Trumpet Blast or some other mass team buff spell. However, this changes the deck a lot, and doesn't have to be better. If you would like to stick to the current iteration of this deck, I would still advise Curious Obsession as well as perhaps some team buff spells and/or some more counter spells, probably not anti-creature counters, but anti-spell like Negate. The burn spells in the sideboard are a good idea, I would add some extra creature removal there.

Waste not Want not

I personally would have made this deck with every Wayfarer's Bauble effect I could find and then 80-90 Wastes... and that's it. Now that's janky. lol. What you got going on here looks pretty good. =)

also Accorder's Shield exists, if you ever wanted another Cathar's Shield in your deck.

I do like Angel of Invention, but I don't have one available right now- I do admit I completely forgot about Fabricate, which works amazingly well with both Myriach and Oketra the True. Adding it to the Acquire board for future deck revisions.

I think I'll drop Torch Gauntlet down to 2x to free up a slot for the one Kinjalli's Sunwing I have. I do like the card, in theory, for giving extra damage on hard-to-block / double strike creatures, plus bumping a couple smaller creatures up enough to activate Rhonas. Onward / Victory or Appeal / Authority could play a similar role, but then they're not permanents.

I have 2x Glorybringer that would be useful for semi-removal + it's just a damn good card, but I'm already topheavy at 5 CMC. Ditto on Carnage Tyrant.

Nice concept. I'm struggling to find a way to utilize Myriach the best way. And the dino subtheme looks fun fun fun. But why Torch Gauntlet? I get the colorless friendly pump but there's more in Standard that can work here, imo.

The 5CC slot is clogged but Angel of Invention is made for Myriach. I haven't tried it because of the price. Also some of the deserts is a nice idea like Shefet Dunes.

I personally can't stand when I have zero removal MB. I'd like to say at least a few spot removal for those creatures that will end the game quick. Or a couple sweepers. Maybe even Fairgrounds Warden would fit.

This is great. How about Scatter Arc and Torch Gauntlet?