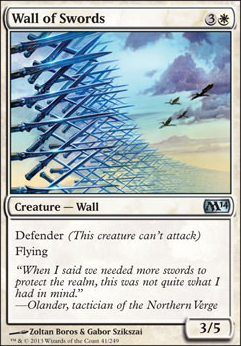 Arcades hits you like a brick wall
by RentableWand 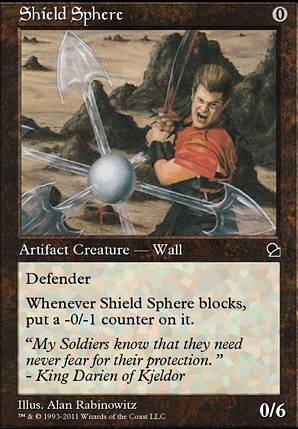 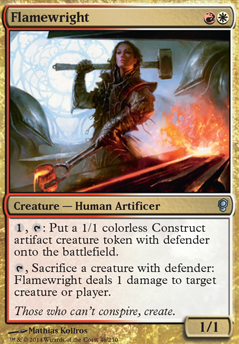 Here, have a wall to the face
by TheHunter317

Thanks for showing up. I hadn't recently updated this deck so I must reconsider some cards.

Speaking of cards Wall of Swords and Tree of Redemption aren't worth their costs. The former dies to our most one-sided boardwipes while the latter doesn't have Trample so it's 13/13 that gets easily chump-blocked. That's why I'm more excited for cards like Angelic Wall or Wall of Runes since they have very 'low to the ground' CMC and aren't that much weaker.

I also used to run Slagwurm Armor but if you use it after you cast it during the same turn it's for +0/+6 without any protection, which screams "JUST SWORD ME MAN". Better option would be Lightning Greaves , which protects the general and combo pieces if needed.

Consulate Skygate might be an option but this is my more budget-oriented casual-competitive deck. Main reason to use it would be two words: Mox Opal , because it's upping the number of artifacts you play, while still being a Defender with all the benefits that come with it. Until then I'd stick to Angelic Wall since I'm a bit too afraid of creature removal.

I like your deck, strong pillow fort with alt win conds. For another flying wall, consider Wall of Swords , 3/5 defender with flying. Slagwurm Armor is another nice card to add, I use it on Arcades, the Strategist when the commander tax gets too high to keep her around for longer. Consulate Skygate is another defender with reach you might consider, and Tree of Redemption is a worthy investment.

I will certainly look at making room for Slaughter the Strong and Aura Shards in my own Arcades, the Strategist deck, so thanks for publishing!

I suggest Wall of Swords

Add Wall of Swords for lols

Arbor Elf for Birds of Paradise
Tolsimir Wolfblood for Elesh Norn, Grand Cenobite
I'd add at least two lands that destroy land. Ghost Quarter, Strip Mine, Tectonic Edge are some examples.
Fragmentize for Naturalize
Lyev Decree for Swords to Plowshares
Wall of Swords for Wall of Omens
Steward of Valeron for Grand Abolisher
Pariah for Kodama's Reach
Brave the Sands for Authority of the Consuls
Martial Law for Ghostly Prison
Selesnya Keyrune for Sol Ring
Druid of the Cowl for Sakura-Tribe Elder
Cathar's Shield for Swiftfoot Boots
Rootborn Defenses for Heroic Intervention
White Sun's Zenith for Storm Herd. This card will win you games.
Sigil of Valor for Shield of the Oversoul
Sylvan Reclamation for Forsake the Worldly
Aura Mutation for Beast Within
Armadillo Cloak for Aura Shards

Here's what I have so far. I'm not done yet but this is a good start. I still need to go deeper into the creatures and add some synergy.

What's your plan? There's a lot going on here, and I have no idea what your goal is.

Are you trying to Combo out with Niv-Mizzet and Curiosity? Then you need more tutors and more draw-spells. (You also need tutors that are better than Rhystic Tutor - that card is terrible, and will pretty much never work in a commander game)

I see seven Walkers and several Oaths. Do you want this to be superfriends? If so, you need more walkers and more oaths. And a lot more board control (e.g., Life's Finale, Phyrexian Rebirth, Final Judgment, etc.)

I see a LOT of spot-removal, but most of it is really under-powered Angelic Edict, Erase, Unsubstantiate. What's the goal there?

Even the mana-base is kind of.... scattered. You've got a couple signets and a talisman. In 5-color, you need to be focusing on mana-rocks that do 5-color fixing: Chromatic Lantern, Coalition Relic, even Manalith are excellent 3-drops. For 2-drops, look at Coldsteel Heart, Fellwar Stone, Star Compass. If you want Cryptolith Rite to do work for you, you need a lot more cheap, expendable creatures. Or some token-generation. Better to cut it entirely than to try to redesign the creature-base around it.