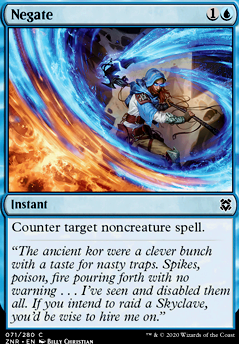 Please, go ahead, draw those cards
by JinxedAce

I'm not really sure I see the value of Confounding Conundrum in standard. I think Negate might just be better for the board.

You've done something to the layout, so all the cards are banded together, instead of being spread out into card types (instant, sorcery, creature etc.), as they usually are. Makes it a little harder to look at.

It seems like your deck is very centered around Slitherwisp, but there are plenty of flash cards even if you take out some of the enchantments. That way you can make room for some cheap and efficient interaction such as Drown in the Loch, which is really strong in this deck. Adding some of the new modal lands over basics might also be nice - Agadeem's Awakening Â Flip etc.

For the sideboard, I imagine you want something like: