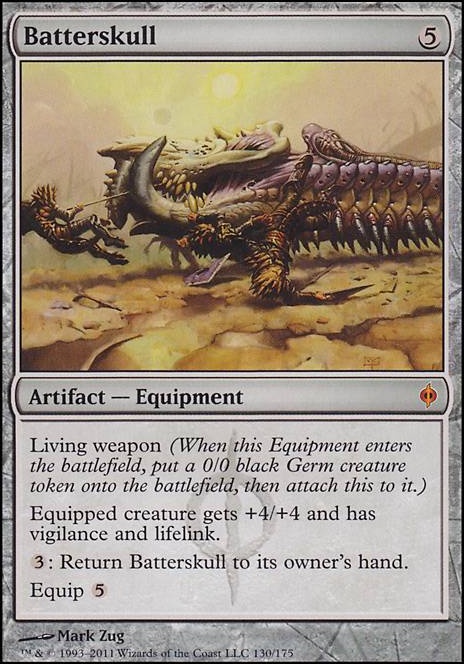 Equipped creature gets +4/+4 and has vigilance and lifelink.

{3}: Return Batterskull to its owner's hand.

Batterskull occurrence in decks from the last year

Jodah has Dragons
by Hellstorment_1509 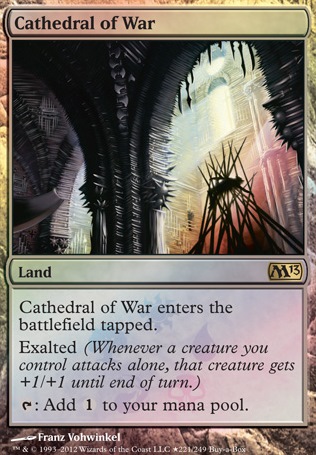 deck looks solid. maybe Shadowspear? I'd also say you should play some number of Collective Brutality in the 75. I am not too familiar with the meta post-companions, but you seem weak to burn and other aggressive decks. Brutality is a good general card that can help you stabilize long enough to get cards like Batterskull or Sword of Light and Shadow on the board (since you would probably need to use sfm in order to get/play these).

Okay but seriously, I want to actually build this one. Been wanting a Voltron deck for like two years now. There are 17 viable Legendary Artifact - Equipment in MTG, since we don't have access to Unscythe, Killer of Kings.

This makes some of the more horrific Equipment, such as Argentum Armor, Batterskull and Colossus Hammer, viable.

Okay so here are my present considerations:

For main board, Grapeshot may be better than Reckless Bushwhacker. It's just harder to interact with. Usually the Whack's not gonna get countered, as I save him a Cavern of Souls, but Wurmcoil Engine or Dredge's enormous board states do make my life super annoying when I go off. The more I think about it, yeah. Grapeshot's in.

And here are the options I'm looking at for sideboards:

Fulminator Mage: I don't need it against tron; this deck just dominates tron. Tron usually plays a big thing on turn 3 and if I have the play I can often win on 4, and if I don't I just chump-block forever. I may, however, need this card against the other popular deck that runs Amulet of Vigor. Thoughts?

Lightning Bolt or Dismember: my deck has no interaction and some creatures warrant interaction. Right? What creatures am I worried about? Arbor Elf? Urza, Lord High Artificer? Batterskull? Yeah Imma probably run Dismember, if anything.

Tormod's Crypt... yeah Dredge is a bitch, and basically my only solution is to race them. Or... to run Crypt.

In the future, please use the Rules Q&A section of this site if you have questions about rules, cards, or card interactions. Please also link cards with double brackets, like so:

Equipment is distinct from the item it is equipping, with its own set of abilities.

When one Arrests the Germ, they are not also arresting the Batterskull. As such, you can still activate Batterskull's abilities.

Hello, i see that you added a LOT of 4c Stoneforge Mystic decks.
If you care about their compeitiveness here are my two cents.

The Stoneforge Mystic "shell" requires you to run 7x cards.
The real issue with that is the fact that Batterskull is much worse, when Tarmogoyf is not the only creature that is able to stonewall it all day.
That is relevant.
Due to the fact that using SFM to play batterskull is the only efficient way to use it in the decks that run SFM. Paying 1W, then 1W, then the equip cost, is very inefficient when it comes to playing the swords to say the least. You, basically need to give up turn 2, 3 & part of your mana on t4 to utilize a sword - while you only need turn 3 and part of your mana on t4 to use swords if you draw them naturally, or using cantrips.
To put it bluntly the group of cards is close to 2 swords + 5 borderline dead cards.

Imho, there are a LOT of better things to do in those 5 slots in the decks you are building.