Goblin War Drums occurrence in decks from the last year

Alesha of House Evangelista
by Crow-Umbra 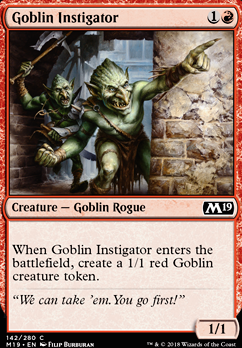 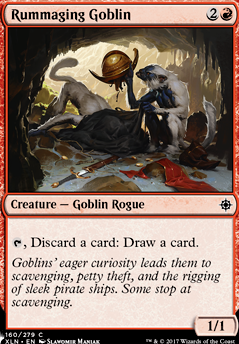 epott It's not silly! I totally get not playing the ascension, but thought it should be recommended in the event you hadn't thought of it! I also get the downsides to Rampage of the Clans. I'm a bit of a chaotic/go-for-the-crazy-move kind of player so it's a card I love. Glad you like the Tower Defense rec. That was an easy one to upgrade.

Just looking over your list again and I would say you should replace Plummet for Beast Within as it provides more options when the moment calls for it.

If you like the "party" theme, maybe cards like Final Fortune, Goblin War Drums, Bedlam, Uphill Battle, Possibility Storm could be of use?

I do love the flavor you have going on in your Artifact department. I missed that before!

Lastly, I notice a lack of board wipes (unless I missed something on your list or it's another flavor/casual choice over competitive then you can ignore this). But Wave of Vitriol, The Great Aurora, Bearer of the Heavens, Obliterate, Decree of Annihilation, Hour of Devastation could be some options for you. (Creeping Renaissance as something to bring back a permanent type if you're looking for that as well.)

If you have the time I'll take feedback on my budget version of Gallia. It's far from great and I have yet to actually use the deck but it never hurts to get another pair of eyes on something. No worries if you don't!

Cool idea, I like that you have a very personal approach to deckbuilding.

One of the most game-changing rules alteration card is probably Void Winnower. It would tie in nicely with your theme, possibly making it much harder to block as well.

Lurking Predators would go a long way to cheat him and other creatures into play.

War cadence is interesting, but somehow I feel a good old Goblin War Drums may be more efficient for less maintenance.

Grenzo wants your stuff but will settle for havoc

Please let me know what you think of my build? I am very proud of it. For suggestions, how about Goblin War Drums and Raging River to add to your evasion factor?

Gassing out can be a major issue with low CMC decks, you want to make sure you draw. For that reason, I don't like Obelisk of Urd or The Immortal Sun for this deck; by the time you get to 6 mana you should already be pouring out your hand. Icon of Ancestry and Herald's Horn come in play earlier and bring Goblins into your hand. Then Vanquisher's Banner renews you hand as you play them. All of these will work well only if all your creatures are Goblins. If you want to add another piece, I would look into Mind's Eye .

I had intentionally left out Rakdos Carnarium, because it is a slow land. This deck needs to be fast and furious.

I can't believe I forgot Shared Animosity! It is imperative to include it. Another card that is on-theme and underestimated is Goblin War Drums , equivalent to Angrath. Also since you want to attack with many small creatures, I am sure you would love Dolmen Gate .

Hope you are not overwhelmed with all these suggestions!

I don't have a Goblin deck, but here is a link to my Vampires, maybe it an give you ideas of a tribal synergy.