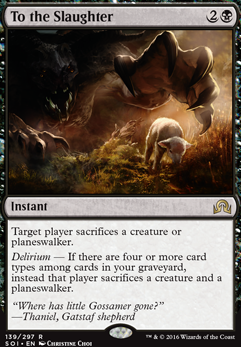 Delirium â If there are four or more card types among cards in your graveyard, instead that player sacrifices a creature and a planeswalker.

Skittles, the Blight Dragon
by Naltur

To the Slaughter Discussion

Have you thought about Deathrite Shaman ? I am also brewing a similar deck and I am running four. DRS turns your spells in gy into fuel to deal addition 2 to their face, or exiles lands to generate extra mana. Also you aren't running any number of Vicious Rumors . I am running 4. It is the only 1 mana 'opponent discards a card' spell in the format which helps get the last couple cards out of their hand (Upside it also pings them for one). Also I like to run Plaguecrafter over To the Slaughter . I am not sure how frequently you turn on delirium, but plaguecrafter has its own little upside that when your opponent doesn't have a creature or PW down, it acts as another discard spell. Finally the last card I am going to mention is Tasigur's Cruelty . If we are going to have cards in our graveyards in Pioneer, I feel we might as well delve them. Let me know your thoughts on these couple cards I'd love to discuss the deck.

This is a brainstorm thread as I don't have a deck list, rather I wanted to float the idea around and gauge the reactions and suggestions to this potential deck concept. That concept being lockdown control with Mogis, God of Slaughter as the win condition.

Why Mogis, God of Slaughter? We won't be giving Mogis any devotion so he'll be an indestructible enchantment which is near impossible to remove in the Modern environment. Because he can stick on the field and has the capability to consistently deal non-targeted damage we're likely going to be focused on using all other cards in our deck to drag out the game as long as possible if not indefinitely. This way Mogis will eventually deal 20 damage to our opponent and there's nothing they can do about it.

1-2-3 ~ Dies to Me: As you can presume the rest of the deck will consist entirely of removal. As it stands Mogis can only deal damage if our opponent doesn't have any creatures to sacrifice and our opponent will try to win by using creatures to attack us. Therefore the more creatures we can remove the longer we live and the easier our opponent loses. Lightning Bolt won't be good enough as our removal package must be able to remove any kind of creature, so exile effects, sacrifice effects, and boardwipe effects are crucial for always keeping the battlefield clear. Other cards to consider: Declaration in Stone , Crackling Doom , Dreadbore , To the Slaughter .

Lands? Other than color-fixing this deck will want to run a full play set of Cavern of Souls as it will make Mogis, God of Slaughter unable to be countered which is helpful against blue control decks.

Bad Match-Ups and Deck Weaknesses? All deck archetypes have bad match-ups, and this deck concept is far from perfect either. While most decks will lack the resources needed to answer this deck other ones can still bypass this strategy easily. Burn is a hyper aggressive deck and even if we remove all their creature threats swiftly, their array of burn spells will eventually out-damage our Mogis. Tron is another problem for different reasons as cards like Karn Liberated , Ugin, the Spirit Dragon and All Is Dust can all remove Mogis, God of Slaughter easily which can result in a long stalemate between the two decks due to our abundant removal. Lastly non-creature combo decks like Scapeshift and/or Ad Nauseam are mostly unfazed by our onslaught of creature/planeswalker removal spells and just like the burn deck they will be able to out-race us with little to no problem as well.

Sideboard and Answers: While sideboards are to be tailored to any given player's meta the above cards listed might help when dealing with the earlier described bad match-ups. For Collective Brutality all modes are relevant when dealing with burn and it can help remove cards like All Is Dust or Scapeshift . Leyline of Sanctity is probably the best card you can use against burn decks while also protecting Mogis, God of Slaughter from being removed by Thoughtseize or Dromoka's Command . Lost Legacy can also remove key cards from problem decks like Ugin, the Spirit Dragon or Scapeshift which can give a very considerable edge when playing up against them.

So what do you think? As mentioned before this post is to brainstorm ideas and create a discussion on the viability of this strategy. If you were to homebrew this deck what cards would you include in it? Would you use blue or green instead of white or leave it as just black and red? Would a deck like this thrive in your local meta or would it fail horribly? Have you ever made a deck that has played similar to this one? I'd like to hear from you about it.

Rhadamanthus on If you flicker something in ...

Thanks, that clears it up a lot.

I think it will help to put this part first: spells and abilities that get put onto the stack don't wait around to resolve at some later point in the turn. After everyone is done with their responses, the original spell/ability will resolve in whatever step or phase the game is currently in. The game can only advance to the next step or phase of the turn if everyone passes when the stack is empty.

Your opponent's play will protect Mairsil, the Pretender in your example. Because the flicker ability from AEtherling waits until the end step to put the creature back onto the battlefield (some flicker effects return things immediately, which changes the answer), that means in your example Mairsil isn't around as Sheoldred, Whispering One 's trigger resolves. If your opponent controls any other creatures then they'll have to sacrifice one of those. They can't "choose" Mairsil and then "respond to the choice" to avoid sacrificing anything. The answer is the same for To the Slaughter , Grave Pact , Dictate of Erebos , etc.

MizzMizz on If you flicker something in ...

Sorry. Ok, to be more specific, my opponent is running Mairsil, the Pretender and has been using AEtherling to bounce her in response to Sheoldred, the Whispering One upkeep trigger. After the upkeep, is the trigger no longer there to make him sac Mairsil when she comes back on his endstep?

Also, along the same note, if it's a general sacrifice spell or ability that says "target opponent sacrifices a creature", like To the Slaughter , can he bounce Mairsil and avoid having to sac her, or does the sacrifice trigger still stay on the stack, making him have to sacrifice Mairsil on his end step, assuming that Mairsil in the only creature on his board? Can he get around gravepact or Dictate of Erebos ?

To the Slaughter looks nice!

gdm1989 I'm thinking about cutting some suboptimal kill spells for cards like Cast Down, Price of Fame, Curtains' Call, and Snuff Out, as well as instants for more utility like Thrilling Encore and Dark Bargain, but I am really torn when it comes to deciding what to cut for these because I've had these spells in the deck for so long. I don't know what I'm willing to part with and I'd appreciate some outside perspective when it comes to candidates for the chopping block if you don't mind.

I played around with Vesuva and Thespian's Stage a little bit in playtesting and I found them both to feel like dead draws when Cabal Coffers isn't on the field. Maybe Cabal Stronghold would be an appropriate include, but the more nonbasics I add, the less Swamps I have which isn't ideal. Expedition Map may help too, but I'm not sure because I feel like the deck is more consistent with my old manabase. I do like the fetches though because they help assemble Delirium on To the Slaughter.

x1 Animist's Awakening, x2 Commune with Nature -> x4 Grapple with the Past

Some number of Pulse of Murasa could also be helpful if early game rushes are a problem. Maybe for 1 or 2 between Vessel and Grapple.

Sideboard should be where enchantment/artifact hate goes (2-3 is a good number, Naturalize is efficient, cheap, and good enough for most situations). Consider for sideboard a pair of Languish for go-wide strategies, and some exile removal for go-tall hard-to-remove strategies.

Vraska's Contempt alternatives: I think planeswalkers will be hard for the deck to deal with, unless creatures are chained efficiently, so making sure your removal hits planeswalkers is a good idea. Some alternatives to Doom Blade are: Hero's Downfall, To the Slaughter, Never / Return).