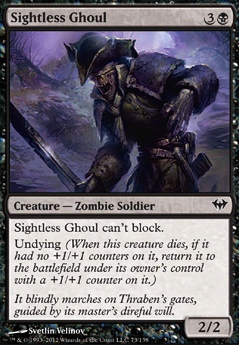 Yawgmoth, Giver of Unlife
by Wiizy

beets, Glistening Oil is an interesting card that I want to find a good use for - but the problem of -1/-1 counters just limits it's use to creatures with Undying like Sightless Ghoul - granting you endless undying triggers. I think Glistening Oil would be better used in a Yawgmoth, Thran Physician deck - not yours. In my opinion. What sub-themes are you including in the deck? Infect can't win games alone.

I love my Yawgmoth deck, itâs a blast to play with..

Some Undying creatures for looping with Yawg-daddy to consider are Sightless Ghoul , Vengeful Vampire , and then depending on your budget, thereâs the Shock -trooper Geralf's Messenger , and the (non-Human) Undying Lord himself: Mikaeus, the Unhallowed ..

The title made me think of a Rankle deck as the little fairy is a trickster, so he might be interpreted as Loki, who's the father of the norse goddess Hel. After scrolling a little through the list, I quickle came to the conclusion that this has to be a Yawgmoth list. That much regarding the flavour and synergies.

As far as suggestions go, how about Geralf's Messenger , Sightless Ghoul , Evernight Shade and Butcher Ghoul ? Just get into play two of these and go infinite, killing all of your opponents off with any die-trigger drainer.

Lord of the Wastes

take out Astral Cornucopia , Butcher Ghoul , Sign in Blood , Sightless Ghoul , Sengir Autocrat , Grim Haruspex , Animate Dead , and Orzhov Enforcer , you have a lot of card drawing already, and more bringing back things from the grave in masses rather than 1 by 1 put in Living Death , Key to the City , Agent of Erebos , Lord of the Void , Yahenni, Undying Partisan , Gonti, Lord of Luxury , Dictate of Erebos , and Carrion Feeder Dictate of Erebos is worth it, it will not only l=allow you to sac creatures and make theirs die but pull out counters, and other things, the real goal is to win, and with more demons on the field and Liliana's Contract you are more likely to get your win con, and if not you have back up options to get other ways to win

I'd say that your ranking of the 4 options is pretty accurate. You missed Smothering Abomination though, which is my number 2 pick I think, especially where it is a sac outlet in a way. Having flying also means it's a bit easier to get dethrone triggers with it if you need to.

I'm currently using Grim Haruspex because it's 3mana and has some wizard synergies, but smothering abomination is very high on my list of potential changes.

Midnight Reaper would be a good include if you needed more life loss cards, or if you needed more card draw and didn't want something like Necropotence. personally i have no issues on those fronts so I've opted to go for the cards i have here. midnight reaper is definitely a good option if you're looking for a low CMC card draw effect to replace Harvester of Souls or river kelpie.

The thing with persist is that other than Glen Elendra Archmage there are only two other creatures that are even worth considering. River Kelpie and Puppeteer Clique. the rest are basically just vanilla creatures essentially in that they have no abilities or other interactions with the deck's gameplan.

as i mentioned before, haruspex is just a more efficient effect than kelpie, 2 less mana is a lot. and i ran clique for a while actually, but i just rarely found myself making good use of the reanimation effect and so i dropped it for something else.

Anything > CMC4 has to be particularly good in my opinion, otherwise it's tough to play in a deck like this since we don't have the ramp that other (Green) decks have available. being able to get the most out of your mana each turn is a big big factor in how effective your deck is.

Undying is obviously much stronger than persist, but again, there's only really about two cards worth bothering with here.

a card which doesn't do more than one thing isn't usually a good pick in my opinion. a creature like Sightless Ghoul which is basically just an attacker with no really notable abilities isn't worth running when its only significant synergy with the deck is that it's hard to remove. cards like Rakdos Cackler are a much better way to get the same effect.

as for undying cards Pyreheart Wolf and Flayer of the Hatebound are the two (other than mikaeus). flayer is too expensive at 6CMC where all he does is give some incidental damage that can just as easily come from attacking. pyreheart wolf might be a decent include, but since i'm running a lot of cards like gravepact and such i can keep the board fairly clear and don't have to worry too much about blockers.

i find that glen elendra archmage is a very strong card in the deck though. flying makes dethrone easy and like you said, sage of fables makes it a great soft lock.

metallic mimic isn't worth it for me since my tribal synergy is pretty light. i have about 7 wizards and nothing else really overlaps much, but if you focus a bit more on the wizard theme though then it would be a great include for sure.

feel free to look at my queen marchesa deck if you want. it's public on my profile i believe.

It's Time To Rise Again

interesting theme, and appears to be a budget deck but that doesnt mean you need to settle for low impact and vanilla creature cards like Sightless Ghoul or Walking Corpse etc.. (there is an argument to cutting the zombies entirely for a spirit based focus)

when creatures like Banshee of the Dread Choir, Bygone Bishop, Fleshbag Marauder, Hollowhenge Spirit, Kami of the Waning Moon or Oyobi, Who Split the Heavens..etc are there to play with.

Rhystic Circle also seems underwhelming in a game with copious amounts of mana, maybe Circle of Despair instead?