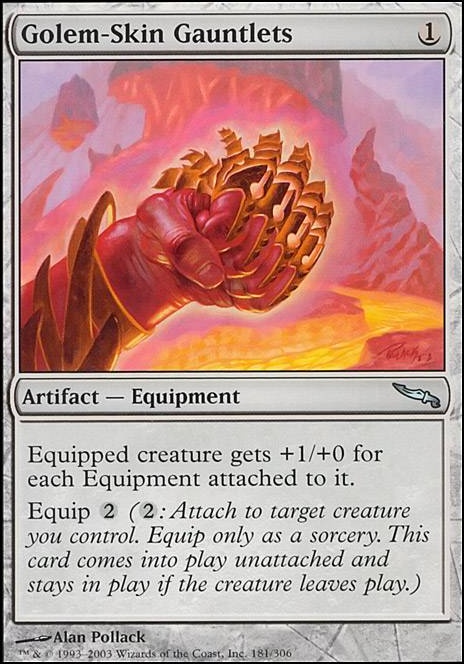 Equipped creature gets +1/+0 for each Equipment attached to it.

Golem-Skin Gauntlets occurrence in decks from the last year 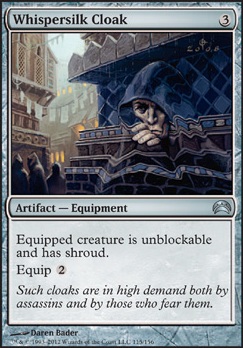 Vulshok Battlemaster is a definite auto-include if you're pulling the Lattice/Brawl combo. I'd like to see if Golem-Skin Gauntlets could also fit in here, as well as Myr Adapter.

To double your goofiness, you can put Karn, Silver Golem and Karn Liberated in as well. Another creature wielding his future self.

I've also brewed a fun Traxos group if you want some ideas. I've had a lot of fun playing Traxos, Scourge of the Casual Playgroup.

Cards I would recommend are Meekstone is oppressive and very powerful. Mycosynth Wellspring and Ichor Wellspring are fun little cantrips in the early game, awesome sac targets in the later game. Some fun equipment to consider are Accorder's Shield and Piston Sledge (an additional sac outlet) and Surestrike Trident and Golem-Skin Gauntlets and Infiltration Lens .

I'm putting together this commander deck. Dakkon Blackblade was my favorite legend when I first played MTG (too bad I gave away my old Legends-era collection that included him). Thanks for sharing it!

Some of the cards are now above the 30-cent price range: Druidic Satchel , Golem-Skin Gauntlets , Emeria Shepherd , but they're still reasonably cheap and worth getting.