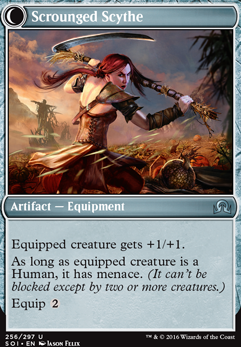 As long as equipped creature is a Human, it has menace. (It can't be blocked except by two or more creatures.) 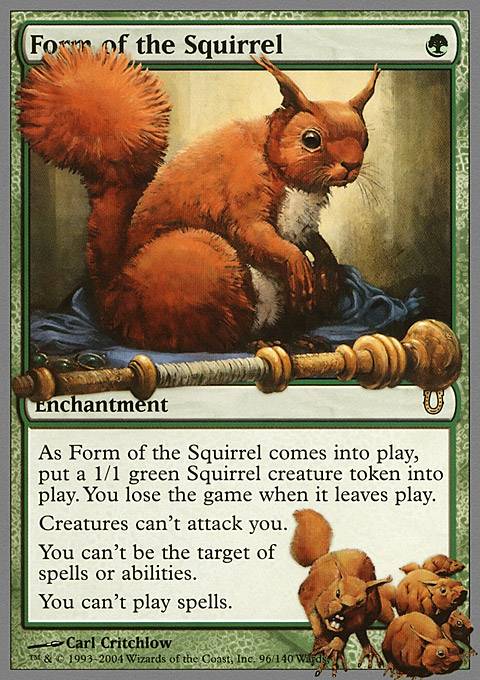 Not to seem brash or rude, but I have a lot of suggestions (love the deck idea btw, but since I really like your idea and wanna see it at it's peak, I'm gonna be brutally honest with you):

A-are you seriously not running Thalia's Lieutenant, Lantern Scout, or Firemantle Mage? D U D E, Rally triggers for insane lifegain and evasion en-masse WITHOUT relying on Odric, Lunarch Marshal and Human perma-anthems? What's not to love!? (See: Eerie Interlude for even more saucy team-saving and destructive shenanigans for flickering key pieces to help the rest of your team or, if you're going all-in on allies [though it's not worth it as it compromises a lot of efficiency for such a tiny pay off], there's Chasm Guide to let those utility guys crack in too if you can't handle holding back on it).

Militant Inquisitor is nowhere near as useful or powerful as those guys, plus Stone Haven Outfitter covers your Equipment buff synergy, though I do see a bit of potential in Weapons Trainer, though not as a 4-of alongside Knight of the White Orchid and Consul's Lieutenant (your 2-drop slots are extremely clogged up- especially with 24 lands). For additional Equipment synergy and some saucy built-in removal, try Avacynian Missionaries  Flip.

On top of this, and going in with the Human tribal synergy and artifacts, Pia and Kiran Nalaar is just BEGGING to live in this deck! Reach for board-stalls, flyer tokens, you can't go wrong!

As for actual Equipments, go crazy on Captain's Claws- 4 in immediately, p l e a s e. It does everything you could want with the deck- even getting Menace online with Firemantle Mage before they can start blocking! Pitch the Stormrider Rig by the way, they're just.. eh. Cheeky, but they don't advance anything. Bone Saw is a much faster and aggressive alternative. At a cursory glance, Haunted Cloak isn't too bad, and Harvest Hand becoming Scrounged Scythe  Flip is just dripping with absolute, synergistic V A L U E! Skeleton Key ain't too bad for sneaking in some shots to trigger Consul's Lieutenant's Renown ability, granting battle anthems and looting to boot!

For late-game reach, Ghirapur AEther Grid as a one-of is very acceptable and will give your artifacts some delicious value, too; or it can function to pick off problem blockers/early attackers the turn it drops with a few Equipments dropping before it for instant payback!

Now, moving onto sideboard. Overhaul it. Please, it's killing me.

3-ish Rending Volleys to kill tons of major players in UW Humans/Mid/Control, BW Midrange/Control, etc etc. Surge of Righteousness isn't a bad as a couple to knock our aggressive B/R Madness, Mono-red, etc. Not to forget Silkwrap, an absolute all-star, and Stasis Snare for knocking out that brutal Ormendahl, Profane Prince (among tons of others cough Archangel Avacyn  Flip cough)).

Y'know I do kinda like those Angelic Purges though. Keep a few of those around man. Radiant Flames is there too, but bump it down to 2 only, and pop a few Shambling Vents or Caves of Koilos to get the extremely important extra point of damage via Radiance through. Bant Coco needs to get hosed and that's a huge sweep alongside your other tech to prevent getting overrun (And with Lantern Scout, you'll be just fine taking hits)-not to mention it wrecks aggro decks as well!

Running a lot of Declaration in Stones make me think that one or two Smash to Smithereens isn't a terrible idea either, since it'll slap them in the face some more after you ruin their board state, and comes in useful against Investigate cores running all the nice creature clue-generators.

All in all, an absolutely beautiful deck idea with TONS of potential though my man. Keep at it! I'll be brewing alongside ya too!