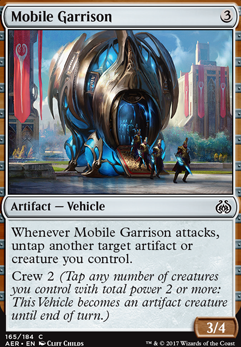 Whenever Mobile Garrison attacks, untap another target artifact or creature you control.

Crew 2 (Tap any number of creatures you control with total power 2 or more: This Vehicle becomes an artifact creature until end of turn.)

Mobile Garrison occurrence in decks from the last year 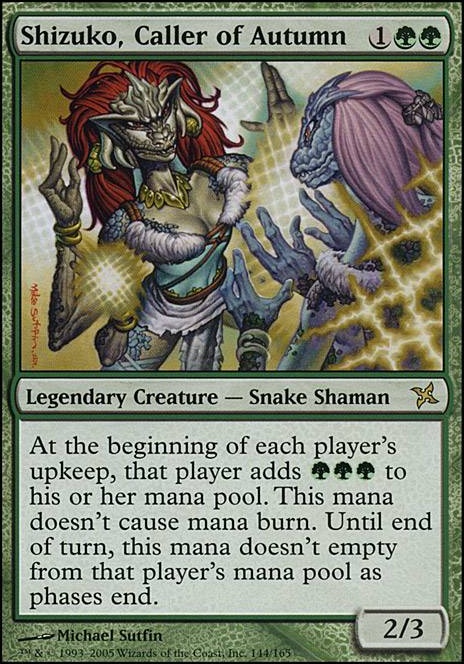 Boza: I like your assessment of the color breakdown in this deck. I enjoyed making (and enjoy playing/tweaking) this deck partially because of that challenge. Also, as you probably know, I'm on a mission to create a pauper deck in every color combination, just for fun. I'm glad somebody else agrees that 3-colors is "best" for this particular deck. =)

I looked and don't actually have any Cerulean Wisps, but you're right, good call. I'm sure I can find some somewhere.

The Alcoholic started off in the original build, but I quickly saw how it didn't jive with Quicksilver Dagger, so I started experimenting (wildly, as always, lol) in that slot. Zephyr Scribe seems pretty cool though, so I can give them both a test together.

I also like Mobile Garrison, so I'll try to squeeze in a few copies as well.

Thanks for your help. Great suggestions!

It is a really funky idea that I think is pretty awesome. the only problem with it is that it is 3 colors and I see no way to cut one:

Blue offers the best ways to tap/untap.
Red offers the most damage on tap/untap and gives access to Quicksilver Dagger, the best card in the deck. Black has the drain effects and cheapest "tap for value" creature.

So, rather than cut a color, it would be best to optimize.

-2 shared discovery (a long shot to have 4 dudes) + 2 Zephyr Scribe - this one is skeptical as requires mana to tap, but the ability is good.

Deadpoo111 on Thinking of Starting a Patreon ...

Sorry this response took so long, just lots of things to respond to, if I don't answer something please point it out so I can do so.

enpc: I totally agree! I've been thinking of expanding past Macar, but I want to finish the Mulligan guide and the Upgrade guide first. I'm especially excited for Mowu, Loyal Companion ! It seems really strong!

TypicalTimmy: I believe I already answered your question, please tell me if I didn't so I can

SynergyBuild: So I've got a few things to answer here. First, the deck is $9.89 at base in NM/M condition on Star City Games, so your claim of $13 on the low end is ridiculous. I specifically say I exclude shipping, lands, and tax. Essentially this whole "fake advertising" point is false, do some research and read the disclaimer before you call someone a liar. To go onto your "advice" as you call it:

1) I know abut your budget folder, hell I love it, but none of the commander decks in it are $10, none of them even claim to be so I'll be keeping the name, thank you kindly!

2) The name attracts players, which furthers the decks goal of spreading to new players

3) You know what? I did design something amazing, 165 Upvotes, 79 Folders, and constant feedback from happy players don't lie. Even if it helped one person, it's amazing and I have multiple instances of proof that it has.

4) This is "The First Good $10 Commander Deck on Tapped Out" Are your decks $10? No. Did I claim this deck is better than them? No. We are operating on two different spectrums and you're claiming we're on the same one, hell the title has gone through changes throughout the decks history when it inspired a $10 deck trend.

To wrap up your first comment, I think it was more a product of salt. Let's talk about the next comment, I like the wrap up! Definitely helps me in writing this response. I agree, that the promise of $10 per deck is not possible so it would have to go to something like $12 to help pay for tax and then buy them in bulk to save on shipping expenses. On the "useful" or "feasible" argument, I would say it is. I've met a lot of players just in my area that want to get into commander but either don't know how or don't have the money, and that's not including conventions and my (multiple) game stores. As for the time consumption, I already have a few volunteers willing to help out/donate a few of the cards to get us started. In the end, your advice had meaning, it just feels like you based it on how offended you were, which hey that's okay, I didn't choose a name like that and not expect lashback.

Boza: That's a really good point! And I think the points on why people would donate are something to look into. I know I've already said it, but this isn't for profit. What would you suggest as some incentives to get people to donate?

Caerwyn: okay, so I'll answer each of your points in order, if that's alright.

1) I completely agree, just like I said in the comment right above, what would you suggest as an incentive to get people to donate?

2) Yes, that is a rather low number, but when I go into college, that number severely increases, I could use the rest of this grade to set up, prepare, and then next year execute the plan. Would you suggest something different (other than not doing the idea)

3) I mean, the purpose of the deck is to control the board and get out big threats in the form of Ulamog's Crusher and Aradara Express , from a lot of reviews (both on and off site) from new players, they tend to love the deck because it's simple. It's also not super linear because you can upgrade it to a full fledged macar deck (which can also be rather diverse).

4) Swamp is the best card? I guess we've just forgotten about Mobile Garrison , Ulamog's Crusher , King Macar, the Gold-Cursed , and Kaya's Ghostform . You should probably look at the decklist before you make a claim like that.

5) I agree that I should diversify the deck choices, I talked about that earlier.

I totally agree that college will open up a lot of opportunities! Thanks so much for the advice, I'll definitely take it into consideration. Finally, with your Talrand point, I absolutely agree! I think the Commander's Quarters just made a $9.95 Talrand deck, it's super cool. That's definitely an option. Thanks again!

FSims81: Appreciate the love! The lgs idea is really interesting and it's certainly something I'll look into. I think that could solve a number of problems outlined in this forum. If I do that, I will have to make more decks, luckily wizards supplies, I suppose. I talked more about this in comment above.

Mobile Garrison can give you an extra tap with Krenko.

Kyren Negotiations lets you cause damage without attacking and it ignores summoning sickness.

So as a fellow player of Renegade Freighter I'm happy to call this one of the coolest new takes on the idea for vehicles. The exalted really helps push damage through and you seem pretty capable of being a real threat even without vehicles. Mobile Garrison is also intersting as it help defend, but I feel as though it could be a dead card if you already have a Frieghter out and attacking, but whether you agree or not with that is fine.

However I'd say that you should think about Kami of False Hope or Holy Day instead of Fog in the sideboard as you seem to have more white than green mana sources. Additionally I would run either Natural State or Fragmentize over Caustic Caterpillar unless you want to keep the creature to help crew vehicles. Also I would consider a few other ideas:

Mana Leak is a good card, but if your using three colours you'll probably want to use as efficent spells as possible such as Dispell; and Vapor Snag is also a good way to stop irritating creatures and is a favorite of mine but Mana leak is still good so keep it if you like it. But mana efficency is also why I reccomend Apostle's Blessing as it can cast with any colour; and as a side note Benevolent Bodyguard can crew vehicles which is relevent, which is also applicable to my recomendation for Kami of False Hope.

I know this may seem like a lot of stuff to reccomend but I love your deck concept and I'd love to see it improve! Cheers and have fun out there!

Depending on how you picture your goblins... I have a lot of fun with vehicles.

I can really see a screaming goblinn behind the wheel of an Ovalchase Dragster and goblins-in-tanks is not only funny but a Mobile Garrison gives you an extra untap with Krenko. I'm thinking about downgrading my Goblin deck a bit to add pet dinosaurs as well. If Krenko is dead nobody is worried when I play goblin, pass turn, goblin, pass turn, Charging Monstrosaur AAAAAAAARGH!