Whenever you activate an ability, if it isn't a mana ability, you may pay . If you do, copy that ability. You may choose new targets for the copy.

Rings of Brighthearth occurrence in decks from the last year

Damia, Sage of Vapors
by ShaelienCorphus 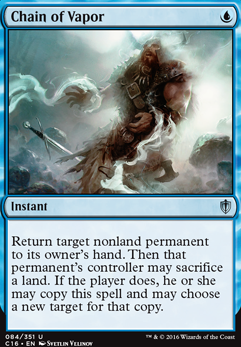 Yawgmoth's Will - Recursion and powerful

Helm of Obedience - Can be used as leyline for another infinite combo. Not great on it's own but worth considering

Rings can also be used with Magus and your commander for additional utility. With fetches, it can help ramp you or blow up their lands with strip mine. Draw more cards with top, draw more cards with necro in exchange for mana instead of life, and much more....

Thank you for your detailed comment! I really appreciate it and loved the way you delivered it.

I love the suggestions of Voltaic Key and Manifold Key, particularly Manifold Key. How did I miss that one!?? I am embarrassed that I did not think to include these artifacts previously, relying solely on Unwinding Clock to untap our artifacts. Including Basalt Monolith is easier now with the presence of these artifacts.

I also love the idea of Strionic Resonator for the reasons you listed above. Doubling the eldrazi annihilator and cast triggers seem ridiculous!

I actually had Silent Arbiter in the deck's early construction. It was in the final 99, but then I swapped in a few cards and decided to make Silent Arbiter one of the casualties. I originally included it for the same reasons as you mentioned. I eventually opted to replace it, thinking that it would not be as helpful due to its fragility of being both a creature and an artifact. Perhaps this was a short-sighted decision?

Unfortunately, my collection is sans Grim Monolith and Rings of Brighthearth. Maybe in the future a copy of these cards will fall into my ever-waiting hands.

So, to review, the following cards are being considered as additions:

After again perusing the current deck list, which cards would you consider replaceable?

Voltaic Key and Manifold Key will give us more value on our larger mana rocks. Imagine netting 5 mana with both and Mana Vault on turn one. Or 9 on turn 2. Manifold Key also allows us to get our commander damage through for a two-turn kill.

With all the annihilator and other eldrazi shenanigans going on in our deck we should be thinking of how to maximize damage.

Strionic Resonator will allow us to double our annihilator triggersâ- imagine annihilator 8, or exiling 40 cards from an opponents library (not to mention Emarkulâs triggered ability). Now, imagine combining the effect with Voltaic Key...

Overrun will be a problem for us, especially with token producers, so Silent Arbiter will benefit us. Weâre likely only going to have 1 meaningful attacker most turns anyway. If we need more, we will need a sac-outlet such as Altar of Dementia which we can potentially use with Rings of Brighthearth to mill our opponents entirely. We can also prevent being milled by sacrificing Ulamog or Kozilek. More importantly, we can avoid theft shenanigans which will ruin our day (how do you like facing your own Ulamog?)

Whispersilk Cloak will allow us to efficiently get that commander damage in in two turns. As previously discussed, Manifold Key will also back this strategy up, as well as Rogue's Passage. With Eldrazi Conscription already on our general, itâs a one-shot kill.

Lanzo493, I completely forgot about Rings of Brighthearth, so I shall modify my own card, even further, to make it more appealing, and here is my new version:

Whenever you activate a loyalty ability of a planeswalker, you gain 1 life.

Whenever you activate a loyalty ability of a planeswalker, you may pay ; if you do, draw a card.

The card now has multiple triggered abilities, and each ability triggers separately, so that they may be put onto the stack in any order.

Now, what does everyone think of this card?

Itâs a good start. Iâve played against many Urza decks. Iâd recommend every infinite mana combo you can muster: Rings of Brighthearth + Basalt Monolith (you have this), Power Artifact + Grim Monolith, Deadeye Navigator + Peregrine Drake, Palinchron + High Tide, Isochron Scepter + Dramatic Reversal (you have this). You will want tutors for these pieces: Tribute Mage, Trophy Mage, Reshape (you have this), Whir of Invention, Transmute Artifact, Inventors' Fair, Spellseeker, Mystical Tutor, Merchant Scroll. You can literally just run every combo piece available in mono blue and then bark up whatever tree is closest. Win cons include Nexus of Fate

(take all the turns), Thassa's Oracle, Laboratory Maniac, and of course decking your opponents with Blue Sun's Zenith and Stroke of Genius. Itâs actually quite beautiful in its simplicity. Just remember that playing Urza isnât about having fun or being creativeâ-itâs about winning!

then of course Blightsteel Colossus

True, DemonDragonJ, but fewer than 10 cards can cheat them out. I think. I know Eerie Ultimatum and Arena Rector are among the more playable ones. Anyway, if I were to make this card, I would have the lifegain trigger every time you activate a loyalty ability. Yes, it is a lot of lifegain, but youâre always guaranteed one life for each planeswalker and it doesnât interfere with the stack the same way ETB does. Lifegain isnât that strong, so itâs okay to get a lot of it. This is also the only way I can think of making sure this card isnât strictly worse than Rings of Brighthearth. At the moment, it costs more mana to cast and more mana for the trigger and is less versatile.