Until end of turn, target creature gains trample and get +X/+X, where X is the number of creatures you control

Tap up to two target creatures your opponents control. Creatures you control gains vigilance until end of turn. 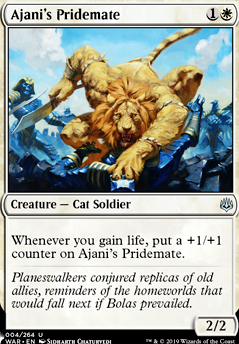 You definitely need to bump Regal to 4. You wouldn't believe how important that card is. This may require you to play more lands. 23 worked for me back during Amonkhet block standard.

As for suggestions, Heroic Intervention is a much better mass protection spell and Blossoming Defense is amazing single target protection spell that serves as a significant buff as well. Appeal / Authority is a great finisher with how many creatures this archetype is capable of putting on the field and is insanely effective if used on a Pouncer.

If you're having trouble figuring out what to cut, Vanguard and Pridemate would be my first choices as lifegain isn't the most important thing to this type of deck and is mostly there just so we live long enough to actually play our big cards against fast aggro decks. If you have any spots left over at that point I would highly recommend Brimaz, King of Oreskos . Real monster of a card.

For sideboard Prowling Serpopard is a priceless.

Gidgetimer on Does Kicker count as part â¦

Thank you for explaining how split cards function CMC-wise. I had totally forgotten about them. Your Armed / Dangerous example doesn't track though. Were you trying to continue with Appeal / Authority and mislinked?

Good suggestion. Splashing green would give me the option of utilizing Appeal / Authority.

Appeal / Authority and Aethersphere Harvester could work well in this deck. I like the inclusion of Shapers' Sanctuary in the sideboard. TBH I didn't even know this card existed, and kinda wish I had known about it before now.

Instead of Approach for the Selesnya version, what about Shalai, Voice of Plenty? She can protect all of your Elves and she is fairly resistant to removal as well. Protect Marwyn, use Marwyn's mana to generate counters with Shalai's ability, and so on and so forth.

Cards to keep in mind here are definitely Radiant Destiny, Huatli, Radiant Champion, and Appeal / Authority. I'm not entirely sold on RG yet because there isn't a super huge payoff to dump the mana in to that both Marwyn and Radha generate. Hopefully we get a few more filler Elves, otherwise I think that in Core 2019 we'll get a few missing pieces as well.

One card I would suggest is Cultivator of Blades. It gives you a really nice target for Appeal / Authority or Huatli's -1.