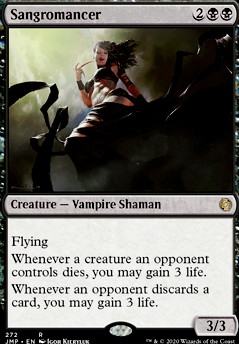 Whenever a creature an opponent controls dies (is put into the graveyard from the battlefield, tokens enter the graveyard before they cease to exist), you may gain 3 life.

Whenever an opponent discards a card, you may gain 3 life.

Sangromancer occurrence in decks from the last year

Draw burn and steal
by Demmyx

Looks good. But no Exsanguinate? Where's Gary... I mean Gray Merchant of Asphodel?

43 lands seems high. You can go down to 36-38 and make room for more stuff by dropping a few Swamps. If you can find/afford Nykthos, Shrine to Nyx, Cabal Coffers, and/or Cabal Stronghold, add those as well in place of a few more swamps. Crypt Ghast (which you CAN play in a mono-black Commander deck) effectively doubles your mana and brings extort to the party - yet another way to gain life. There are other black extort creatures if you just want that effect.

Do you anticipate playing against decks that produce a lot of creatures? If so, then I would add one or two more board wipes. Your Sangromancer will thank you. Revenge of Ravens is a cute way to deter attackers. It also makes me wonder if you have enough creatures for Ayara to put in the work you're looking for? Test it out before making changes on that front.

Looks great! Personally I would make these swaps: