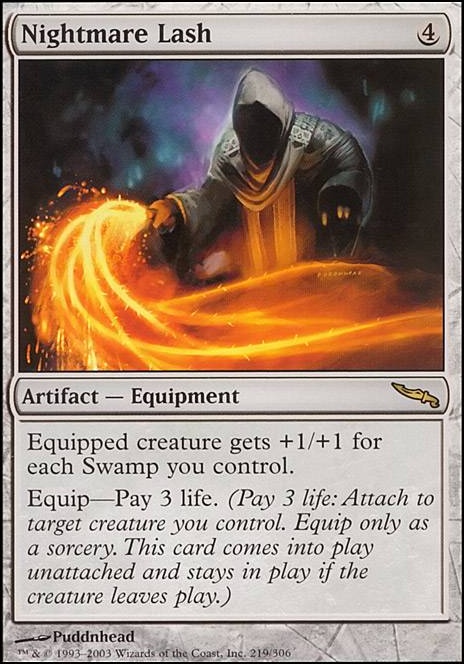 Nightmare Lash occurrence in decks from the last year

@Mortlocke thanks for the compliment and +1! I have put a lot of thought into running Deadly Rollick and I own 2 copies, the only reason I haven't fully decided is because most of my removal is used before casting Skittles but it is so good I am going to take your advice and at least test it out. I used to run both Nightmare Lash and Lashwrithe but they were underwhelming. If I didn't have 6 swamps out they weren't a 1 hit kill so the swords work much better in their place since I get protection from 2 colors and 2 benefits when they hit the player. I'll probably end up removing Runechanter's Pike in favor of Blackblade Reforged after some additional testing. Turcaut's craftsmanship is unmatched and you can find his business page here. Thanks again!

I think Runechanter's Pike could be swapped for a different equipment. My considerations are Sword of Light and Shadow or even Nightmare Lash to compliment the crusader.

Sword would give crusader protection from the last major color for removal purposes. The lash could hit turn 4 right after your t3 crusader for massive poison.

Another suggestion I could make would be to swap out a lot of the discard package for Aether Vial to get your battlefield developed quicker. Vial gives you good tempo to land creatures and removal at the same time.

Lastly I would trim a couple of the 4cost creatures for more lands and change Cathedral of War and Mortuary Mire into another couple swamps. You are an aggro deck that should be swinging with multiple crearures which would invalidate the exalted of cathedral. Not to mention a land coming in tapped really slows things down.

Ashiok, Nightmare Muse ensures people don't attack you back as much. It also controls their hand. Nightmare Lash goes well with Urborg, Tomb of Yawgmoth, Whispersilk Cloak stops removal and buffs, but makes your infectors unblockable. Might of Oaks is a strong finisher. Might of Old Krosa is good too.

DarkHero on Yawgmoth in my meta

As others have said, you should be in good shape. Mono Black can be very easy to run on budget, excellent at creature removal, and can find ways to out tempo ramp decks.

Victim of Night , Doom Blade , Go for the Throat , and Murder are all fantastic removal on a budget.

I wouldn't worry about blocking ramp as much as I would focus on creating it in your own way. Along the lines Dark Ritual or Artifacts. Cabal Stronghold is the budget alternative to Cabal Coffers . Crypt Ghast might be slightly out of budget, but does the job of Nirkana Revenant somewhat cheaper. I'm a huge fan of Life's Finale , which is criminally underplayed and pretty budget, especially in a meta that isn't in their own graveyards too much. It's always good to have a boardwipe or 2 on deck, but I find mono black can get quite a lot done with spot removal, and that is far easier on a budget. You already have Damnation when you need it. Black Sun's Zenith is also an option because you can proliferate the counters later. Lashwrithe and/or Nightmare Lash are good and not expensive. Disciple of the Vault is again criminally underplayed if you want to go that route. Get yourself some cheap tutors cause thats Black's go to. Diabolic Tutor , Scheming Symmetry , Beseech the Queen are the best budget options. Card draw is a must, and you get Sign in Blood , Read the Bones , and a host of other cheap draw spells to go along with you Phyrexian Arena .

And I hate to be that guy, but infect is pretty budget, on theme, and works wonders even if you just splash it as a win con. Tainted Strike Plague Myr Ichor Rats . You can then use your Commander to pay and discard a card a few times to win.

Black has a ton of options even on a budget. Just depends which way you want to go.

How about something spicy with Nightmare Lash ? Just run Urborg, Tomb of Yawgmoth and as you already run Land tutors like Weathered Wayfarer it should be doable :)

And yes, it all works with color identity.