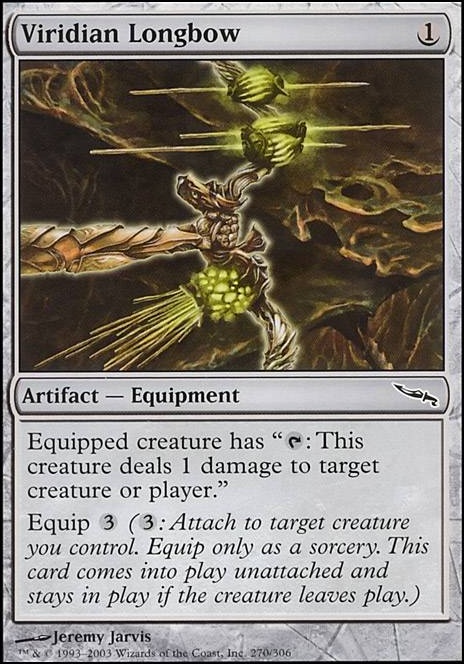 Equipped creature has "Tap: This creature deals 1 damage to target creature or player."

Viridian Longbow occurrence in decks from the last year

Tell Us Where The Bad Lady Touched You
by Galleon_Pendragon

Wait for the board to fill then play Vicious Shadows and then play Blasphemous Act. I love that combo.

Wait for the board to fill then play Phyrexian Scriptures. Next turn play Thrilling Encore.

I love commanders that give you free range to build a deck to however you decide to create it. A good example of this is Queen Marchesa. I built a Queen Marchesa deck with a bunch of deathtouch creatures other dangerous creatures like Michiko Konda, Truth Seeker Ophiomancer and High Priest of Penance. To create a unique pillowfort. Why this kind of pillowfort you ask? Because it's also a planswalker deck with 12 walkers. But that's not all. I also have a plethora of card combos like Protector of the Crown and Shielded by Faith and all the above board wipe combos. And the board wipe combos act like win conditions too.

This is why Queen Marchesa is good. But she gives the monarch. Thats what makes her great. And she has deathtouch and when you dont have the monarch you get deathtouch Assassins that die to Skullclamp or act as good blockers for planswalkers. Creatures with deathtouch work great with Thornbite Staff, Viridian Longbow and Chandra's Ignition. Giving you simple control.

With all that being said. Are their other commanders that you have built around? That has a deck design that seems to be unique? An example of this would be rashmi, eternitites crafter. Rashmi creates no direction to build a deck. A bad example would be Lathliss, Dragon Queen. Clearly you need a dragon tribal. So Lathliss, Dragon Queen gives you a direction to build.

So everyone please share your thoughts and explain what commanders you believe are good for this and share what you did to make it unique.

bushido_man96 - I do already have Conjurer's Bauble in the list, but I forgot about Urza's Bauble. It's probably better than Ichor Wellspring in this build. I'll definitely swap those. Tangle Wire is interesting, but I am not really into playing mana denial type stax.

Daedalus19876 - Good point on Sheoldred. I just love the card so much haha. A lot of my removal package can hit multiple permanent types which is why I didn't feel the need for more specific removal, but I do have a Force of Vigor sitting around so I can see about adding it. Thornbite Staff is basically a board wipe with Glissa on the battlefield due to her deathtouch. Viridian Longbow is another option with her. I've seen Ashnod's Altar + Grave Pact + Hex Parasite in Glissa before, but not Attrition + Ornithopter. I'll have to consider it.