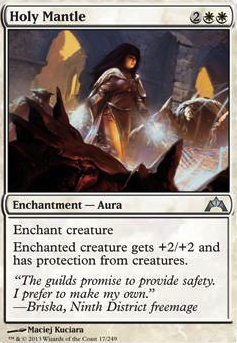 Enchant creature Enchanted creature gets +2/+2 and has protection from creatures.

Holy Mantle occurrence in decks from the last year

Slayer of Titans
by SirFowler 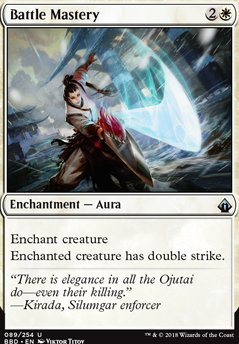 You've convinced me to use Blessed Alliance! And, on top of what you said, Blessed Alliance is a white mana card! How about Haze of Pollen as a card that is useful as a sort of protection card that can stall the opponent until I get enough mana if I don't have the advantage with mana, and, plus, it is using some green mana which I need cards to use (the only green card I have is Pride Sovereign)? And, if I have two Pride Sovereigns exerted, or if I need time to use Anointed Procession and then cast whatever spells afterward, the Haze of Pollen will work nicely with the turn advantage. But, Holy Mantle is persistent, while Brave the Elements and other protection cards are only one-turn instants, even Haze of Pollen. And, the mana cost for Holy Mantle is a problem.

Out of all of the protection cards Holy Mantle and Brave the Elements seem the best. The only problem is that Brave the Elements won't work for Pride Sovereign. I wish that Pride Sovereign were white, then I would have my entire deck as white! Plus, Brave the Elements out of all of those cards is affecting all creatures that are white that I have rather than an instant that works with only one creature at a time. However, Haze of Pollen is like these cards, but costing only two mana, and on top of that it protects all creatures from attacking no matter their color or what-have-you.

If I shouldn't play Oketra the True , what card do you recommend that is just as good or better? I need a heavy-hitter in my deck that is cheap in mana (specifically white so that Oketra's Monument works with it) and powerful enough to be a game breaker!