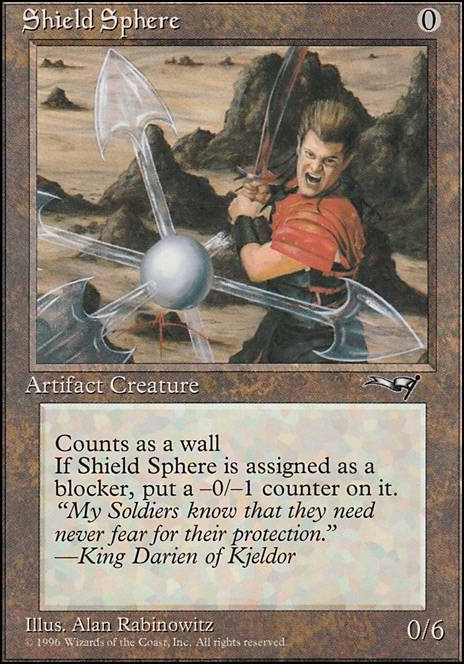 Whenever Shield Sphere blocks, put a -0/-1 counter on it.

Shield Sphere occurrence in decks from the last year

We thank you for your comment and your enjoyment in reading our Bible!

The cards listed are more tailored to a build of The Wallmaster that is far more combat-based.

Assault Formation is a great mana sink for a finisher turn, being able to buff all our walls up very quickly and performing an alpha strike. We use High Alert instead, as it acts as a combo piece with Axebane Guardian and enough defenders.

This could be good for the list due to it being easily grabbed by Muddle the Mixture, but as of yet there's no space.

Shifting Wall is actually pretty viable for our list, acting as a secondary Shield Sphere, at least CMC wise, for a free draw with Arcades. The issues are the bad interaction with Cloudstone Curio, or moreso, the lack of interaction, and the fact that we need to put at least 1 mana into it to make it stick. It could be useful in an Intruder Alarm wall-spam turn, however.

Necropolis is interesting, but the CMC is too high for the base stats and effect, also we tend to appreciate recursion, (Sevinne's Reclamation, Dawn, Eternal Witness) over scavenging.

Dragon Throne of Tarkir is a power-matters card, which we can't commonly see being higher than 3. However, it is very powerful on those big, swingy turns.

Our deck looks for combo over damage, we may build a more 'restrained' Bible sometime, which is more based on beating face. If that comes, the Throne is in.

have you considered Shield Sphere?

I have a Teshar list myself and I found out about Matter Reshaper these days, and boy, this card is nuts in this deck. Another card I'd like to mention is Shield Sphere . It's better than Ornithopter, because it can block Tymna decks for some time.
On Thin Ice is a good removal to have if you have a snow-covered manabase.
Oh, and I plan to test the new Heliod in the 99. It combos with Ballista pretty easily, it can be tutored with Enlightened Tutor, it's historic, and it's just 3 cmc.

Replaced Shield Sphere with Expedition Map to help find Inventors' Fair or any land that can help us to tutor for the winning artifact.