Whenever equipped creature is put into a graveyard from play, return that card to play under your control if it's a Samurai.

When Oathkeeper, Takeno's Daisho is put into a graveyard from play, remove equipped creature from the game.

Fight Amongst Yourselves
by orion996 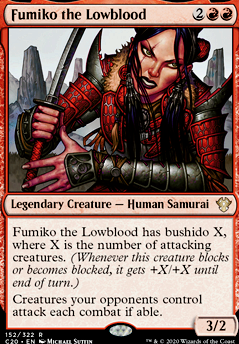 I recommend Oathkeeper, Takeno's Daisho, you do have to get risky and let mistform die. Still it's a decent buff for a commander that will usually have evasion. Mainly you're here for returning him for free. If they exile it from the grave in responce, ok, command zone, If they destroy Oathkeeper, ok command zone.

legendofa on How Much Could Kamigawa Be â¦

Could the planeswalker be a different weapon? The idea of a powerful being (planeswalker) inhabiting a weapon would work very well in Kamigawa. I also don't know much of the story behind Umezawa's Jitte. A quick search comes up with Tenza, Godo's Maul, Tatsumasa, the Dragon's Fang (which kind of has this idea), Oathkeeper, Takeno's Daisho, and Konda's Banner for legendary equipment from Kamigawa. Or have it be some other weapon--some type of non-sword weapon, like a bow or spear, might be interesting. Just tossing out ideas.

Oathkeeper, Takeno's Daisho could be pretty great and on flavor

Nice take on Toshiro. I would recommend Oathkeeper, Takeno's Daisho as an extra protection for Toshiro. It is basicly a Gift of Immortality for samurai. Plus it also gives some stats. Other than that idk, you already checked my version, there's nothing more I can tell you apart from what I already did with my deck. :)

Yo! Wy no try some janky combos like Oathkeeper, Takeno's Daisho and Wanderwine Prophets? If you champion any other merfolk and manage to do damage you get infinite turns!

Riptide Laboratory is a big miss too