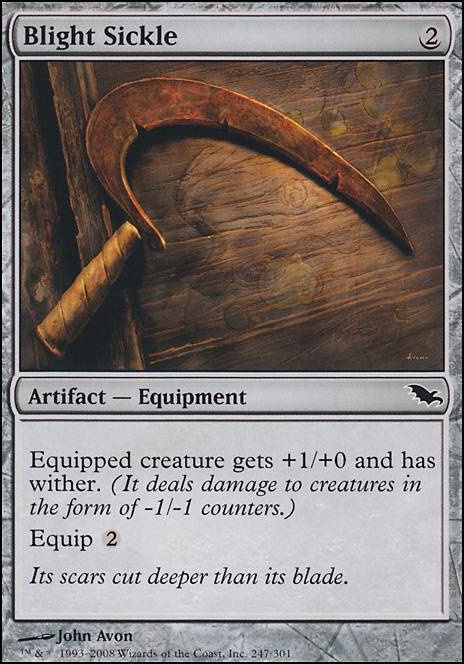 Equipped creature gets +1/+0 and has wither. (It deals damage to creatures in the form of -1/-1 counters.)

Akiri, Swing Away
by serenity519 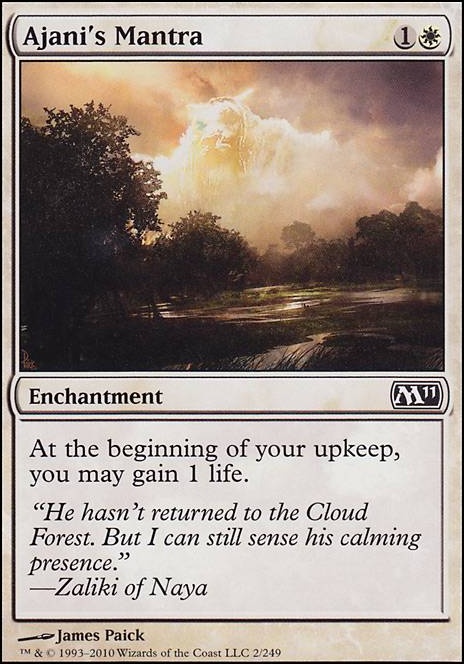 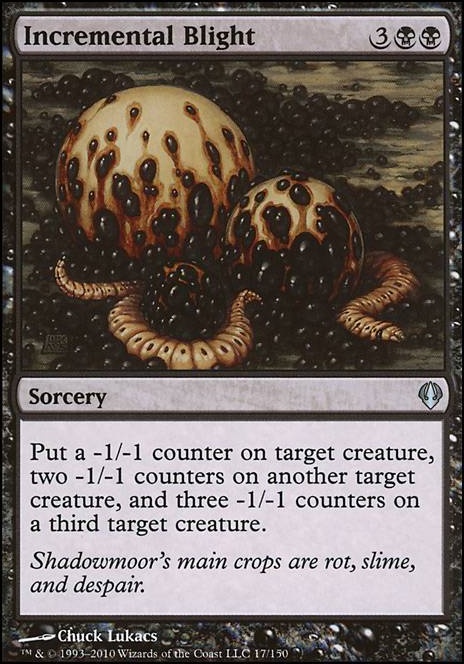 my dice bag suffers when i play this
by LuminAutopsy

Sram, Dwarf of 1000 Hands
by Kalamer_Ruki

Nice Deck. Take a look at Brighthearth Banneret I think it is a really good addition. I have a 5 color ping EDH deck that uses equipment to create janky combos. In Pauper it didn't seem to work because I couldn't find much deathtouch/etc. and buffing won't help direct damage... I like Blight Sickle tho.

I also made a Chakram Deck, take a look and let me know what you think: Pinging Pauper Partners - Help Wanted!!!

TheRedGoat: Thanks for the thoughts/suggestions! The only pieces that care about -1 counters being on the creature when they die are Necroskitter and Blowfly Infestation - the former may get cut, and the latter mostly sticks stuff on my own creatures (so it's not a problem really). The deck mostly cares about the -1 placement itself :)

And regarding your suggestions - Plaguemaw Beast is interesting, but I'm not super convinced that it's worth the 5 mana and waiting for summoning sickness to wear off... Poison-Tip Archer isn't really worth the 4 mana to me, though I could see it fitting into my sideboard for the additional usefulness of having reach (this deck struggles with fliers). Driven / Despair is actually something I want to fit back into the deck when I find space for it (it may replace Necroskitter)! Rishkar, Peema Renegade just seems like a less good version of Cryptolith Rite here, another card I'm trying to fit in (too few slots, bleh). Quillspike recently got cut because he was too fragile, dies from a single counter, and is only really useful with Devoted Druid. Flourishing Defenses is just too much mana for its effect, unfortunately. Harbinger of Night just got cut - he was just too slow and tended to cause problems. Blight Sickle is not efficient enough, in my opinion (I'd rather run Glistening Oil, ANOTHER possible inclusion), and while Hex Parasite is cute against opposing PWs and maybe could find a home in the sideboard, he doesn't advance my game plan enough to put him in the main deck.

Thank you again for the suggestions! :)

So I have a question: How well does this deck interact with +1/+1 counters being placed on creatures? Or having -1/-1 counters removed before the creatures die?

Also, a lists of cards that could be useful (unknown if you already knew about these or play tested them)(would still want to hear your thoughts on them within a deck):

Yeah, in EDH, you can only have cards that correspond with your commander's color identity. It's okay, my buddy used to put Guttural Response in his Kaalia deck but took it out because it had a green mana symbol in the card.

Black Sun's Zenith is pretty budget I think, it's insane in Hapatra. Grafted Exoskeleton is also really good but it might draw hate to that creature or artifact since infect scares people very quickly.

Some other cool cards that is most likely budget:

Necroskitter Lockjaw Snapper Putrefax Noxious Hatchling Withering Hex (you can facilitate this by having lands and other cards that cycle! Just a thought) Blight Sickle

Just some thoughts to get you started. Good Luck!

Two things I think are out of place. The first is Hakim, Loreweaver. The second is Vorosh, the Hunter.

Full disclosure, I don't have a Vorosh deck, but I've been theory crafting and looking into it. Hakim is one of my main decks. Please factor this accordingly.

In the case of Vorosh, I think people underestimate that color combination substantially. It has access to cards like Vanishing or Diplomatic Immunity allowing it to dodge and preserve counters, as well as counterspells and tutors. Black and blue have a ton of ways to make creatures unblockable, as well as ways to deal with threats. I would by no means call a Vorosh deck fast. But with ramp and a good set of answers I wouldn't call it tier 5 either. After it lands an attack once, it can drop any player within 2 turns via unblockable commander. And again, it's color combo lends itself well to biding its time and riding out threats. Not to mention a late Beacon of Tomorrows or Time Stretch is a guaranteed kill if cast at the right time.

Hakim is definitely one I personally use so pls no bully. But the ability to recur enchantments without having to expose yourself by attacking means you can make a resilient one man control platform. All the pieces it needs to come online and become a threat are recurrable. Enchants due to his ability, and equipment due to being able to be fetched from the graveyard by blue. Charisma, Psionic Gift, Neko-Te, Vanishing, Grafted Exoskeleton, Pemmin's Aura, Quietus Spike, Drake Umbra and other totems, Freed from the Real, Eldrazi Conscription, Illusionist's Bracers, Hermetic Study, Diplomatic Immunity, Sword of Kaldra, Corrupted Conscience, Blight Sickle, Sigil of Sleep, Oracle's Insight. The overlapping cards fulfilling the same role combined with the fact you can comfortably dump to graveyard(by overdrawing or other effects) means you can quickly dig for what you need. It's somewhat mana greedy but once it spools up its very hard to deal with. You've gotta get past counterspells, phasing out to dodge, recurring umbras, and hexproof. Usually multiple of those are online by like turn 7 or 8. And once it is online you can start trading mana 1 for 1 to get devastating effects. 1 blue mana can get you: destroy or exile target creature, put a poison counter on target player, "permanently" tap target creature, gain control of target creature, half target player's life, draw a card, etc. And if bumped up with helm of the gods or enchant stacking buffs all of this can be done while going full aggro on someone to proc annihilator or punch their face for damage. Finally, he can use recurring mass sacrifice effects to wear down enemies. Smokestack presents a somewhat mana inefficient option lategame to limit enemy's board state. For example, if you have a pemmin's aura, psionic gift, Diplomatic immunity combo online, you can run a smokestack at 3 charges indefinitely. Sacrifice the 3 Enchants during your upkeep, then pay 6 blue to rebuild them leaving the rest open for counterspells. Enemies are losing 3 permanents a turn while you keep enough mana open to counterspell or ping as needed. If brought online lategame after a board wipe your enemies will be completely unable to rebuild while you can continue building up your combo pieces.

In the case of both of these decks, they lend themselves to a decently strong voltron option. But they also both have access to some of the best ways to keep a creature alive through board wipes and preserve their bonuses they've been accruing.

With Vorosh, in theory a bit of biding your time combined with an Unblockable enchant(of which blue has tons) can build up to a time walk effect wherein you kill a player before they can even react. With Hakim, he turns into a controltron that is highly resistant to most answers against voltron decks, while also being able to rebuild extremely fast unless someone can punch through those multiple lines of defense AND wipe the graveyard out quickly.

Keep in mind, I HAVE NOT USED VOROSH, but I do play decks that operate in a similar manner. In theory Vorosh has a great deal of potential as a lategame sweeper with low time to kill aided by time walk effects.

I DO HAVE A HAKIM DECK AND AM THEREFORE BIASED. But hakim is(after some costly spool up) an absurdly efficient controltron commander. He can singlehandedly kill multiple players in a single turn via poison counters and Illusionist's bracers. Or permanently detain an entire board. And the fact all of these are instant speed means he can save his effects til end of turn on his enemy's turn leaving mana open to counterspell threats he can't deal with.

Great looking list! Looks fun. One think I was suprised not to see and I think is worthy of a spot in the deck: Blight Sickle. Colorless, on theme, feeds your general.

The Rise of Man's Fall

I'm in the process of building my own Titania deck and came across this list. I'm really enjoying the look of it overall.

How do the token doublers (Doubling Season etc) work for you? There's no question that getting more 5/3s is good, but do you feel it's worth the card slot and fairly high casting cost of these enchantments? It seems like you're able to go off with Food Chain, Command Beacon, and Titania pretty well. Another infinite option is Temur Sabertooth, Titania, any land sac outlet (Zuran Orb, Sylvan Safekeeper, etc), and Gaea's Cradle. You're only short the Sabertooth of being able to hit another infinite mana/creatures combo.

What role does Blight Sickle serve in this deck? That's an oddball tech card that I haven't seen around very often.

You've got Song of the Dryads and Thespian's Stage, so don't forget that you can copy anything on the field with that combo! Just enchant someone's bomb with Song of the Dryads, then use your Thespians Stage to copy the "Forest". Your Stage becomes whatever that permanent originally was. This works with Vesuva, too.

Does Avenger of Zendikar pull his weight for you? 7 mana to make 0/1 tokens that are only useful after a few more landfall triggers is quite an investment. Is it mostly just here as a Tooth and Nail target to go with Craterhoof Behemoth?