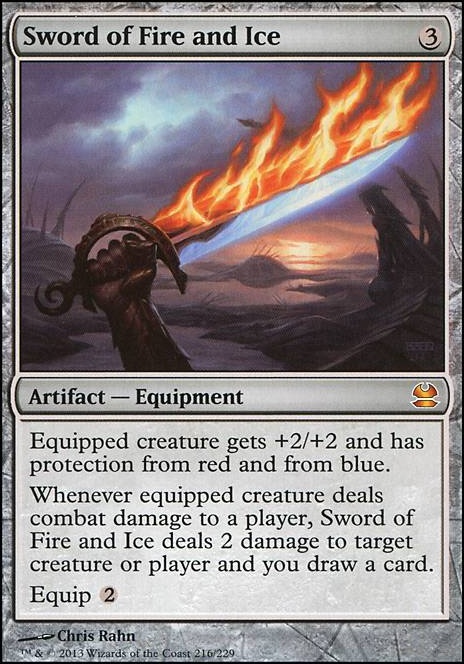 Equipped creature gets +2/+2 and has protection from red and from blue.

Whenever equipped creature deals combat damage to a player, Sword of Fire and Ice deals 2 damage to target creature or player and you draw a card.

Sword of Fire and Ice Discussion

Flawless Maneuver is currently in my Maybeboard. I like the idea of it being a free save for Balan or a way to spare my board from my own sweepers. I wouldn't call it better than Teferi's Protection though. Protection stops things that Maneuver can't.

And why would I be constantly tapping out every turn? My utility lands and removal spells appreciate me leaving mana open.

Sanctuary Blade, Trailblazer's Boots, and those card draw Equipment all have the same problem: they don't do enough. I only have so much space for Equipment, so I need to make every slot count.

I had Burnished Hart before. Took it out as it was a bit too slow for this deck's liking.

Grafted Exoskeleton is a no-go for me. Infect (and poison in general) is a greatly hated mechanic. I don't want that negativity attached to this deck. I used to run Inkmoth Nexus, and it wasn't an enjoyable experience for anyone.

I have an issue with Inspiring Statuary, and its the word "nonartifact." It can't make Equipment cheaper to cast, and that's a major dealbreaker.

I don't know what your budget is but a Stoneforge Mystic would fit nicely in this deck.

Also all the "good swords": Sword of Fire and Ice, Sword of Feast and Famine , Sword of Body and Mind, Sword of Light and Shadow, Sword of Sinew and Steel, Sword of Truth and Justice, and Sword of War and Peace.

They're an investment for sure, but super on theme with the deck (I mean, knights and swords go together like tuna and mayo).

1) Your land count is rather low. I'd recommend upping it to 38 lands, especially considering your rather high mana-curve as well as the extra mana you have to pay for equip costs, even if reduced by Zirda.

2) You're lacking in card draw and ramp. I'd recommend putting in some more mana-rocks for the ramp (easiest fix). As for the card draw, since your deck is focusing on equipment, I would focus on equipment that lets you draw cards. Sword of Fire and Ice is kinda pricey, but one of the best ones that I don't yet see in your deck is Mask of Memory. As far as ramping and drawing cards with equipment, Sword of the Animist and Mask of Memory are the best. Having those as well as ways to tutor for them is the best way to ramp and draw cards in your deck. With that in mind, you're missing an important tutor in your deck, Open the Armory. And of course, on your wish-list when you have the money I recommend investing in a copy of Smothering Tithe.

3) There are a few really good cheap creatures that hold equipment really well. Puresteel Paladin is another of those to pick up when you've got the money or trades for it. A cheap one that's really good in equipment decks is Fervent Champion. For almost all equipment equipping to this dude is free. He's not expensive either!

I gotta say though, there are a lot of cool interactions I see in the deck. Cracking a Burnished Hart for only one mana must seem like the best feeling in the world.

Wheel of Fate is great when you're able to dump out your hand. It basically gives you 4 turns to play your hand out so that you can draw the most amount of cards for it.

The only way I see Humble Defector working is if you can make a deal with someone to give it back to you. If you're confident you can do that, then go for it, but I don't quite like it.

I do recommend running Open the Armory, another tutor for equipment. It can tutor you your Mask of Memory and Sword of Fire and Ice that you already run.

You also already run Idyllic Tutor, so running an enchantment that can draw you cards might be better. Stuff that fits that build is Outpost Siege and Vance's Blasting Cannons Â Flip.

@Wicker of course! I would definitely toss in

Those are the most expensive additions I can think of.