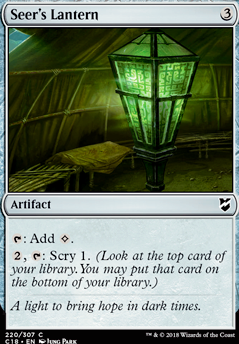 Seer's Lantern occurrence in decks from the last year The first thing I see- you have 15 pieces of hard ramp in your deck, but only 31 lands. Especially considering your mana-curve, 31 lands is not enough. I suggest upping your land count to 38 and cutting a handful of ramp cards as you have so many. In particular, I don't think you need Seer's Lantern, especially considering you already have a copy of Sensei's Divining Top. I also don't think you need Walking Atlas as you don't have enough lands to support it consistently. In addition, if you want to pump out big angels, you'll want to have ramp that really puts you ahead. In particular, Thran Dynamo is an excellent choice to get you from 4 mana to 8 (provided you hit you land drop, which you want to do every turn).

The next thing- your deck's ways of generating card advantage aren't very consistent, they generate it typically in ways like getting lands to your hand, tutoring, making tokens, etc. Only 3 of them actually increase the amount of cards in general you have access to. You do have some of the best ones though like Mask of Memory, Magus of the Wheel, and Tectonic Giant (I typically count impulsive draw, the exile and you can play for the next turn as card draw since it practically increases your hand size). Mask of Memory is one of the best ways to draw cards in any aggressive deck- the problem is, you need smaller creatures to stick it on early so you don't have to wait- and the cmc of your creatures is really high. If you want to go angel reanimator with your deck, wheel effects is the best card draw for your deck. You already have a copy of Magus of the Wheel, you might also want to include Reforge the Soul and Wheel of Fate. The caution with Wheel of Fate is that it's awful late game. And of course, when you can afford it, Wheel of Fortune is the best- it's the original after all.

I would also balance your mana-curve. It's high in some places and really low in others.

Last of all, some cards I recommend. Winds of Abandon is one of the best pieces of removal for EDH that has been printed in a while. I definitely recommend adding it in. Heliod's Intervention is also incredible. If you need more tutors for equipment, Steelshaper's Gift is the best you can get. Lyra Dawnbringer is a great angel for angel tribal. Blasphemous Act is one of the best boardwipes in Boros colors for EDH.

Let me know if you need any more help! I also recommend DespairFaction. He has a YouTube channel known as Commander Replay and also has plenty of great decks here on tappedout.

YOOOO!!!!! It's your local Azusa player possibly recommending a card I don't play myself despite the severe irony, High Market - It helps prevent your commander from getting stolen, life gain is nice amoung the other benefits that a sac outlet provides that my highasss can't remember.

Cut Darksteel Citadel for Deserted Temple - Untap opponents lands for politics, your urza lands, seagate, blastzone (you need removal) and arch. Yes, all very expensive, but sadly your deck needs it. At least any other land than citadel. Stop having Azusa Strip Mine Flash Backs

Cut God-Pharaoh's Statue for Sisay's Ring - By the time you get 6 mana, even with all the rocks, its not worth it. Life loss neglible and tax is as well. If you really wanted to tax the greedy green fucking azusa bitch, you should run winter orb. I know you don't wanna make it a stax deck, but unless you get a crazy start, you need something that can help you later down the line.