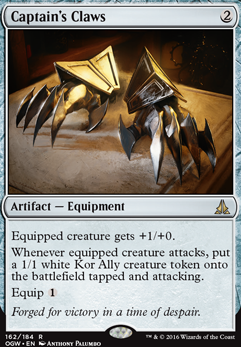 Captain's Claws occurrence in decks from the last year 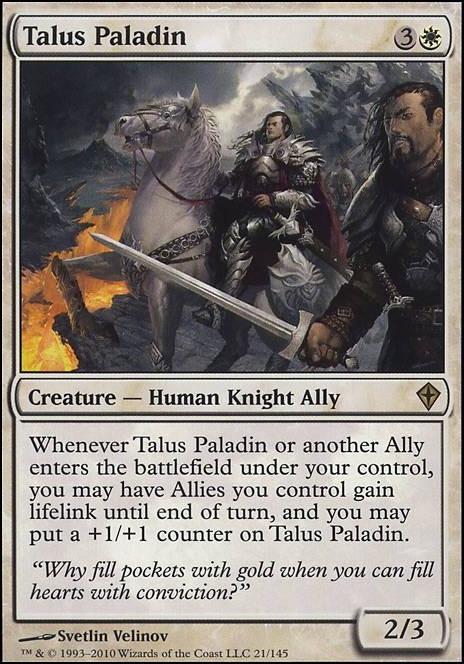 This looks like one fun deck! For your consideration, you may want to take a look at Phyrexian Rebirth and Martyr's Bond as additional removal. Blinding Light can open up the field for a big swing, and if you have True Conviction on the field, it's really going to hurt. Captain's Claws might be good sideboard card to make more tokens. Keep up the great work!

Kor Bladewhirl and Serene Steward are both cards that rely upon others to be good -- just as you pointed out the cohorts are -- and frankly neither has a good enough effect to justify including here. Steward gets me one counter for one mana when a Cleric flickers, as opposed to Hada and Kazandu each getting counters for free. Bladewhirl is slightly better but if I have protection I can block without fear anyway, I wouldn't need first strike -- And those being there means I don't have a flicker spell.

As for Eerie Interlude , while you point out that modern is heavier on spot removal than boardwipes, they do exist in the meta -- Maelstrom Pulse for one, which is a killer outside of a singleton format. There are also auras, bounce spells, burn spells and the like. Flickering a couple of creatures for lifegain, protection and pumping is a better solution than just having more creatures.

Tormod's Crypt is fair enough, but it doesn't stop cards from being targets in the graveyard -- Exiling a graveyard is a last resort instead of the utter intent. The sideboard is up in the air, so I'm not discounting it at all.

Captain's Claws are quicker than some equipment and the tokens coming in are an absolute boon with allies -- If you're drawing lands, you still get the ally triggers when you attack; Protection and Lifegain guaranteed every turn.

Allies are symbiotic; They do rely on each other to be effective. While the advice on that player gave you might be correct most of the time, here it's the complete opposite. Modern isn't as loose of a format as EDH -- Where you have room to experiment and have fun with creature choices, especially with Tazri where you can get the best of all colours and have a searcher on tap -- what works there rarely works here. Modern is about mastering the curve and cost effective choices; Seizing and maintaining the board early.

Buffy & Angel (The Greatest of Allies)

I'm not gonna run Captain's Claws. I would rather play something else at that point on the curve. To me Gideon, Ally of Zendikar offers a similar effect, but better.

You get an Ally whether or not you attack, and you get a bigger one.

I cannot justify Cavern of Souls AND Ally Encampment. I have already explained why the ability on the Encampment is so good for this deck.

Sorry clayperce but there are WAY too many things to address in your post.

The only things I will respond to is that Hada Freeblade IS an excellent card ... but so are all the other cards. I tried four of, and it threw the balance of the deck out.

Unlike Kazandu Blademaster it doesn't have Vigilance.

I'll give it one more go.

I will not drop my land count. 22 is low enough for this deck. Don't forget that I DO want to cast Gideon as soon as I can.

I will make two concessions for now by trialling Aether Vial and swapping a Kor Bladewhirl for a Hada Freeblade.

Argy,
I should have known Collected Company would be towards the top (if not the top) of your Most Hated pile o' cards. Consider it shredded. :-D

So, I ran some tests ... nothing rigorous by any means, basically just a bunch of abbreviated matches (with sideboarding) vs. a few decks from wyquem's Modern Gauntlet. In no particular order (and with all the caveats that come with limited testing), here are some thoughts:

Speaking of sideboard, I found myself REALLY wishing I had some more hate cards. Here are some thoughts ...

I also ran a few games with 4x Aether Vial. I cut 1x Gideon, Ally of Zendikar and 3x Join the Ranks to make room, though I'm almost certain that was not the optimal place to find the slots. Nevertheless, it really felt like a huge upgrade.

Anyways, hope that something in this Wall of Text was useful, and sorry for wasting your time with the pieces that weren't!