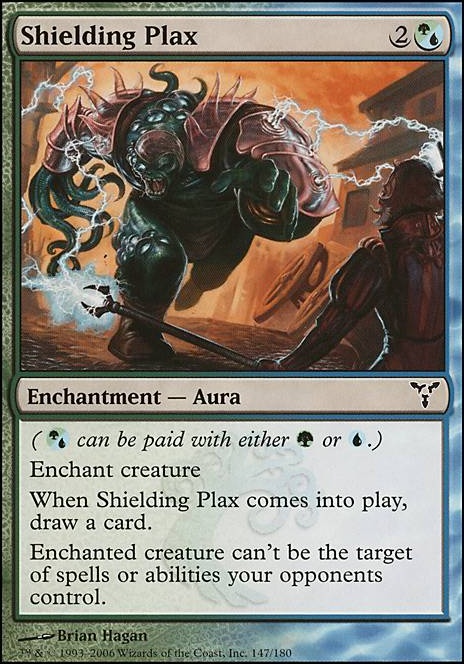 When Shielding Plax enters the battlefield, draw a card.

haldan and pako
by lorthosthetidebaker

Yarok Doubles Down
by DelightfulWaffle

The Simic Combine
by Five-Sided-Prism 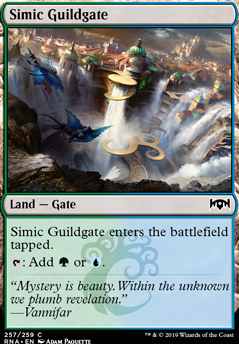 My usual go to is usually any type of protection. It's usually Shielding Plax as it gives Tuvasa hexproof and the main way of her dying is usually by exile from a stray Swords or Path. Vanishing or Flickering Ward is my alternative way to protect her with Privileged Position is my last way.

In terms for what I tutor up...it all really depends. She is so versatile that you have answers to any situation. You need unblockable? Steel of the Godhead. You need Trample? Rancor. You need life? Daybreak Coronet. Extra damage? Ancestral Mask or Battle Mastery.

Looks like a fun deck to play. I like a lot of the spells you run. If I might offer some suggestions, I think something like Eternal Witness would help you if something gets destroyed or you need an important spell to recast from your graveyard. Using that same line of thinking, Mission Briefing is like a budget Snapcaster Mage. It can let you replay an important spell from the graveyard. Shielding Plax is a good protection enchantment and I think it works well here because it replaces itself by drawing a card. Good luck with your deck!!

To also answer your question, I purposely made Tuvasa have no counterspells, for my own reasoning, it's 1. Dilutes the deck when you want to draw more enchantments and 2. I'm usually the threat and therefore it's more of a answer this now rather than I'm answering other people. I play in a degenerate meta so I'm often prone to having my board answered quite often, it's mostly play by ear and see what's on the field. If you know that there is a person playing a lot of boardwipes than go grab Shield of the Oversoul , Flickerform , or Hyena Umbra , same with targeted removal. Situations are always conditional and go to move is always to protect Tuvasa, against targeted removal I usually try to go for Shielding Plax or Vanishing . The more you play the more you can kinda expect what to happen but that's also the fun of it! I tuned my deck based on my meta and it reflects on how I play, if you feel like you need to add in counterspells or more protection, go for it! This is just my take on my Tuvasa deck and your free to adjust it as you see fit (major advocate of building your deck to suit your taste and personal preference!).

I agree with Pikobyte on the protection options; they are all pretty great. Another option you could consider in the way of protection is Shielding Plax ; I prefer this over Diplomatic Immunity since it has the option of drawing you a card.

Now, as for making the deck faster, I prefer to [along with the more premium ramp spells] run some includes that synergize with Muldrotha, like Font of Fertility and Wayfarer's Bauble . Also, Burnished Hart can be pretty alright, but may be a little slow (Test it). I would cut Primal Growth and run faster ramp too like Rampant Growth , Farseek and Nature's Lore . I don't think this deck needs the extra card advantage from Cultivate either, so don't run that. The deck also can recur mana dorks if they die, so Llanowar Elves are a great card here, along with their functional reprints.

I like to run Seal of Doom as more redundancy for your removal.

I would upgrade the mana base - doesn't have to be anything too fancy, just some Kaladesh fast lands, check lands, and pain lands in place of Temple of the False God , Dimir Aqueduct , Darkwater Catacombs .

I would also consider adding/replacing mana rocks that can sacrifice themselves for benefits. ( Commander's Sphere , Mind Stone , Hedron Archive ). They will let you dig for your combo faster without giving up much of an opportunity cost.

[As for cuts, Phyrexian Delver feels unnecessary, as does Apprentice Necromancer . I would also try to find a balance between all permanent types (maybe even run some planeswalkers) in order to get the most out of Muldrotha.