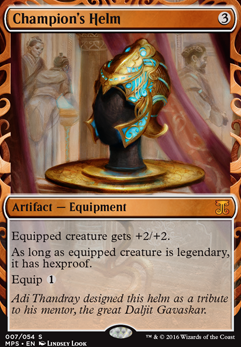 As long as equipped creature is legendary, it has hexproof.

Champion's Helm occurrence in decks from the last year

The Ultimate Phalanx *PRIMER*
by NV_1980

Ok so looking at the list it seems like its heavy with ways to protect your commander but maybe a little light on splashy triggers from your commander. Think of it this way, you get Yennett out turn 4/5 and swing next turn. Right now you are much more likely to hit something that won't impact the board much. If (when) I was building it I prioritized cards with awesome Enters the Battlefield abilities. That way if I flipped one with yennett something happened immediately. Thats why sorceries and instants are good with her since it becomes a free spell. Any creature you flip can't do anything until the following turn. I will offer some little suggestions here but you should really consider what your win condition in first. Is it commander damage? Is it swarming with creatures? Do you have a combo you are digging for?

Blessed Wind is funny but I would swap it for Plague Wind.

That Which Was Taken is too expensive of protection. Swap for Champion's Helm or General's Kabuto Or possibly just cut it for something that will impact the board like the three new instants from the commander decks in your color Deadly Rollick, Fierce Guardianship and Flawless Maneuver. If you can afford/get those cards they would definitely kick up to compete level here.

You need Lightning Greaves. Getting yennet protected and with haste will always be good. Maybe take out Bloodthirsty Blade since it doesn't do anything for your commander and there are better ways to deal with opponents creatures.

As much as I love Spirit of the Night lets be honest you will never feel good about casting it for 9. If you don't cast it for free it will most always be a bad card in hand. I would replace with the new card Verge Rangers which is perfect for this deck. It will ramp you on occasion AND lets you look at the top of your deck whenever you want.

Thanks, king saproling! I think some of these are a little weak, but Champion's Helm, Bastion Protector, Hyena Umbra Open the Vaults, Unquestioned Authority, and Divine Reckoning are definitely going in

Here are some thoughts from me:

If you are moving towards more cards that drain your opponents out, then the new Bastion of Remembrance is great! Enchantments are more difficult to interact with than creatures. This makes it a more sticky win-con.

Desecrated Tomb is another fun card in a deck like Shirei. It isn't as strong as Pawn of Ulamog, but it's a little more resilient.

The one thing I worry about when looking at this list is how vulnerable Shirei is. He is your deck's engine so more protection for him might be helpful. You already have Greaves, but you might want one or two more pieces. Cards like Swiftfoot Boots, Imp's Mischief, Champion's Helm, or Kaya's Ghostform are all options.

Likewise, running cards that can still be effective without him (like Nether Traitor, Reassembling Skeleton, or Tenacious Dead) might be useful. Each of those three cards can move in and out of your graveyard with-or-without Shirei. Plus, each of them go infinite with Phyrexian Altar and Pawn of Ulamog/Pitiless Plunderer if you are inclined to want to do that.

Thanks Karolina! Go for it, it's really fun. Nobody expects voltron zedruu. And yeah it could probably use a few counterspells. I actually need to update my list, i've since added some protective stuff like Curator's Ward and Champion's Helm