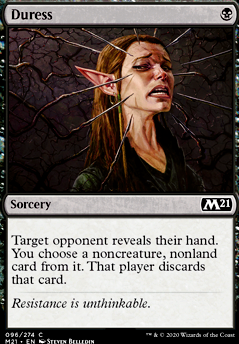 Target opponent reveals their hand. You choose a noncreature, nonland card from it. That player discards that card.

Duress occurrence in decks from the last year 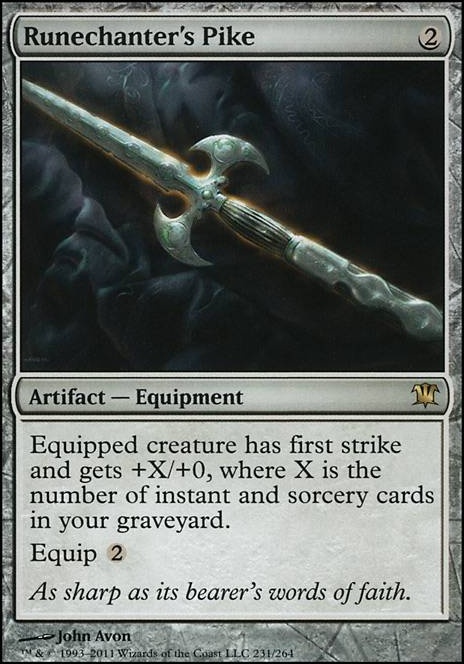 Saying that you "choose the color before the ability resolves" would mean there is a moment before you start to resolve a spell/ability where those decisions are made. Let's take an effect like Duress. If I have to choose a noncreature, nonland creature before I saw my opponent's hand, then Duress would be a completely unplayable (and confusing) card. The point of an effect like Duress is that you get to use the knowledge that you gain from looking at someone's hand when you choose a card.

Oona's ability requires that you make a similar choose to that of Duress but at a different time. In both cases though, you make your decision during the resolution of the spell/ability.

Thanks for the suggestions tru13. Unleash Fury looks especially effective. Iâll test it out.

Against mill, I would think this deck would be strong, considering the reanimation spells and Kroxa. The sideboard is theoretically set up to help in a situation like you described. Pharika's Libation is blackâs only answer to enchantments, besides catching it early with Duress or discarding it with Lilianaâs +1. I would switch out the self-mill and Embraces to make room.

That's a cool looking deck. I had a similar idea. I think Duress is a good one drop to enable turn 3 storm wing. One suggestion I have is repalicing Frantic Inventory with Winged Words since all of your creatures have flying and it has a better failcase.

I might use some discard spells like Duress to get those pesky counterspells and other crap you don't want to see out of the way. Also, maybe replace Sphinx's Insight with something else that can draw cards for cheap at instant speed; you already want to be at instant for Improbable Alliance to work.

"So, I cast Tinybones, Trinket Thief, does it resolve?"

"Yes, Tinybones, Trinket Thief resolves, dude, I'm playing mono-white, and I only have one mana, and you Duressed me like a second ago."

"Yeah, but you, know, you didn't counter my other spells..."

"So? Dude, why would that make you think I had more counterspells? You already Duressed me!"

"But read his flavor text, he says that big distraction stuff so I thought you just let duress through to counter my big threat in Tinybones, Trinket Thief!"

"You are a boneheaded moron, dude, you saw my hand like a second ago with that Duress. WHAT COULD I HAVE COUNTERED THIS FRIGGIN PIPSQUEAK WITH? Ugh, sorry, it's just a game, I know, you can be such a big headed idiot sometimes, but it's all a part of your charm."

"Dude, I can't be boneheaded and big headed. The card's name is Tinybones"

"Before you do, can I go to endstep so I can draw a card off of that Mana Tithe I made you discard?"