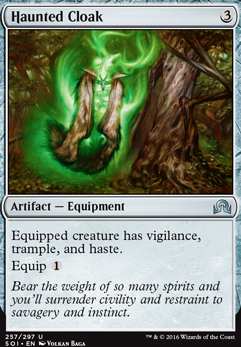 Haunted Cloak occurrence in decks from the last year

In addition to the six ways to give Radha Trample and Haste, I think it is important to explore extra ways as well. Bare in mind she can get incredibly beefy, and will be a prime threat at all stages of the game.

Therefore, it is important to make her as imposing as possible. Redundancy is key, here.

Are 12x sources of Trample and 12x sources of Haste overkill? Yes. But when I have 12x lands in play and activate her ability twice, she gets +24/+24. That's a TKO if she connects, since Commander Damage is at 21.

So yes, it is overkill. But, that's how she's designed to be played ;)

I'll cut Dinrova Horror, Scuttlemutt, Haunted Cloak or Vorrac Battlehorns.. But you're better to know what to cut, while playing the deck, you'll see which cards you prefer and which one you never play

Personally I love playing narset, and relish the hate the deck generates. That being said, i play typically only a few rounds a night with her, since I play it til it wins then switch decks to be fair. I'm not a fan of Lightning Greaves with narset, since it turns off protection effects like the swords, auras, and Reconnaissance . I use either Swiftfoot Boots , Haunted Cloak , Sword of Vengeance , or wait a rotation to attack. Timing it right can be tricky due to wipes, but I've been successful too much to worry about interference. +1 from me, a narset player on a budget.