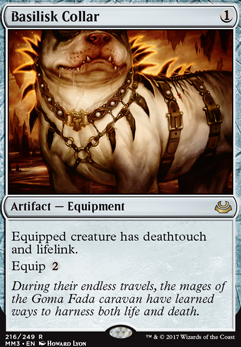 Equipped creature has deathtouch and lifelink.

Basilisk Collar occurrence in decks from the last year 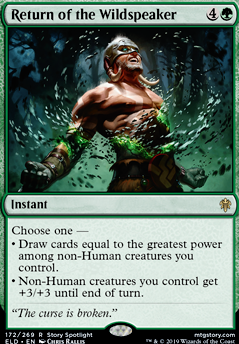 Hey, nice you're welcome. The most important card in my opinion to add is Necropotence. Paying life to pump Greven and put cards into your hand is major value. Necro is much better here than Arena for not much more in price. Early game ramp and draw is important because Greven is a five drop. Being a five drop and your deck is built around Greven could be problematic and too slow without more early game ramp.

Another idea for early game plays is more enablers for reanimation to get Krrik onto the battlefield to abuse Phyrexian mana with Greven or Kokusho to gain life. Buried Alive, Entomb, Faithless Looting, Thrill of Possibility. These cards are also good with Anger as a haste enabler for Greven. Greven being a five drop makes haste helpful to attack and at least get some draw value from him the turn you play him.

You're right you want to some what balance life loss with life gain because you want freedom to pay life to get the most out of Greven and Phyrexian mana with Krrik. I would have a higher amount of life loss cards than life gain cards. I don't think you need a lot cards that can gain you life just efficient cards. In my opinion spells that can give Greven lifelink as a one spot deal are not worth including.

Equipment, creatures who gain you life, static abilities, auras are better since they can be repeatable. Shadowspear and Basilisk Collar seem pretty powerful for low mana cost with Greven. Vampiric Link is a one mana aura for lifelink. Kokusho and Gray Merchant of Asphodel are good life gaining sources when you have multiple opponents. Greven can sac and Phyrexian Reclamation can repeatably recur these creatures to do it again.

Xenagod loves The Great Henge. He also loves cards that draw you cards based on a creatureâs power, so that would include Rishkar's Expertise, Return of the Wildspeaker, and Greater Good.

Some good generic equipment to consider is Shadowspear for the trample and life link as well as Basilisk Collar for giving to deathtouch your creatures that already have trample with that setup, practically none of the damage can be prevented unless they have a dozen chump blockers. Imagine slapping Chandra's Ignition on top of that. It causes bigger life swings than the famous black X spells. Plus, you keep your favorite creature and commander through the board wipe, so it greatly favors you.

Some creatures I run that are great are Pathbreaker Ibex and Savage Ventmaw (he pays himself back immediately with Xenagos out). Giant Adephage can cause shenanigans, too.

How would you feel about a Basilisk Collar or Shadowspear for lifelinking?

Pro_Noob I was trying to keep this deck as budget as possible so as much as I would like to put Basilisk Collar in, I simply dont have the money, but that is an upgrade I would like to put in for the future. The other reason that card is in here is because the way I have been playing this deck is to try and ko people with one attack as often as possible, or two attacks in some situations, and Blessing of Belzenlok is a good way to surprise gain a bunch of life when people are not expecting it and catapault myself into the lead.

Go ahead, build ur Zedruu deck, my foil Goatnap is waiting.

GenesisOdin Thanks for the suggestion! I will defiintely keep that in mind as I continue to change the deck and cut and replace cards. While I like the idea of both of those cards (especially Rescue from the Underworld), I just dont think they have a solid place in the deck atm because of how creature light it is, and that there arent any creatures that I really need to win the game, more just creatures that enable me a lot more than normal (looking at you Tavern Swindler and Captivating Crew). If I do transition into a more creature heavy kind of deck then I will definitely look at these cards again though.

as a first look over I only have a few comments

Blessing of Belzenlok - honestly? kinda just seems like a subpar Basilisk Collar, but if its a budget deck that might be the point too lol. like sure the stat boost is nice and all but you are starting with a 5/5 body that has innate buffs, so the static effect of collar is probably just better here, especially since deathtouch and trample combo so well together.

Bone Splinters - fits the theme and probably for budget considerations too, but just seems underwhelming, esp at sorcery speed and non recurrable. I feel like there has to be an enchantment or artifact or something with a similar effect as an activated ability that you could swap for.