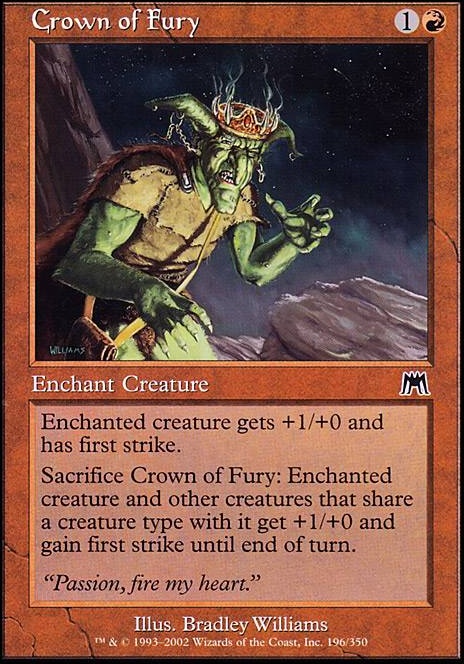 Enchanted creature gets +1/+0 and has first strike.

Sacrifice Crown of Fury: Enchanted creature and other creatures that share a creature type with it get +1/+0 and gain first strike until end of turn. 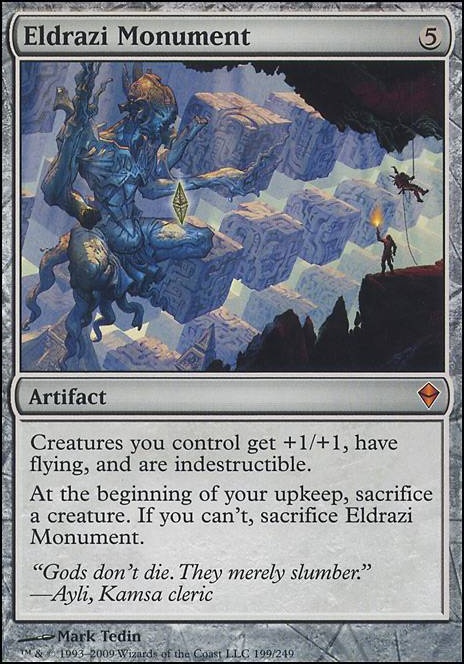 [screams] DONT TOUCH ME
by Curiositie 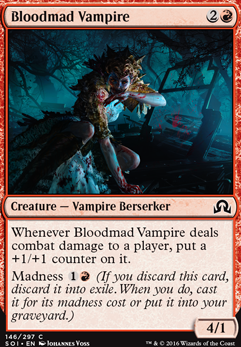 DinrovaHorror A rakdor vampire deck migh be way funnier and more flexible but also more inestable, never heard of Crown of Fury, might consider adding it. Thanks for the advice.

I've been trying to make a rakdos vampires deck for a while now, but I've yet to come up with a build I'm happy with. Maybe the problem was going two color? Either way, this seems like a really fun deck! Have you considered Crown of Fury?

If you want an anti-non-tribal board wipe, Harsh Mercy.

I do highly suggest adding Patriarch's Bidding at least to the side board. It's always a big help for a tribal deck after a boardwipe. Have some exile graveyard cards (Bojuka Bog anyone?) and it doesn't help your tribal opponents very much anymore.

Amulet of Vigor would be good with the lands you run as well.

Steely Resolve could also work since you don't have many things that target your (living) stuff.

Crown of Fury is also fun for a tribal.

Really, take a look at The Bones To Build Your Tribal Deck for more ideas. Some of the dragons in the deck seem a bit clunky and not worth the slot (Dragonlord Kolaghan) but the deck looks fun enough to play with your friends.

Glad you liked my deck enough to make a version yourself! As I've said, Aurochs are one of my favorite tribe because they're so powerful the more you have out.

My deck focused on using Shared Animosity to buff however many Aurochs I had out where your deck focuses on getting more out.

After doing some play testing with your deck, it gets mana screwed for me a lot (probably luck of the draw and tappedout being annoying) but it feel like you don't have the draw and it slows the deck down. As much as I want to love Descendants' Path in the deck, there just aren't enough Aurochs for it to be beneficial, it seems to do more harm than good. Once it's out you have a low chance of the next card being a Auroch and a higher chance of it being a helpful card that gets put on the bottom of the deck. I suggest adding Lifecrafter's Bestiary which would let you scry to increase the chance of the top card being an Auroch for Descendants' Path to work even better, and as an added bonus, it adds some card draw for you so you can miss less land drops.

I love the Crown of Fury being in the main deck since it means the Aurochs won't die when attacking (unless another creature has first strike).

I don't feel that you need 3 Fires of Yavimaya, 2 should be enough (sideboard 1 just in case though).

Cultivate is a nice card, but for 3 mana it slows the deck down on that turn 3 or 4. If you play Overgrowth then you can play Cultivate on turn 4 which will prep you for playing Aurochs on turn 5, but I'm not sure it's really worth it. Maybe try testing some Arbor Elfs instead of the Cultivates? They untap a forest, so a forest with an Overgrowth on it will yield 3 + 3 = 6 mana from being untapped. Otherwise it's a nice blocker so you don't need to waste your Aurochs (it also is a bigger target than the Aurochs because 6 mana is amazing and other players don't want you to have 9 mana on turn 4). If you don't want the elves in the deck then Search for Tomorrow acts as a cheaper Cultivate that you can play turn 1 and get the benefits turn 3 (this allows for you to play an Overgrowth on an untapped land so you can use 3 mana on turn 3).

Overall, nice deck, can use some tweaking as can any deck. I'm glad I could inspire you to make a deck for Aurochs, they're such sweet gentle creatures (until they stampede lol).

first of all i love tribal decks so good luck with it. 2. Hamletback Goliath is not that good if u cant give it trample. and finaly some ideas, not sure if they work but inspiration is always nice :) . Goblin Recruiter, Goblin War Strike, Goblin Marshal, Quest for the Goblin Lord, rekless one, Goblin Scouts. Goblin Matron, Last Chance, Last-Ditch Effort, Goblin Ringleader, goblin slide, Crown of Fury, Sparksmith.