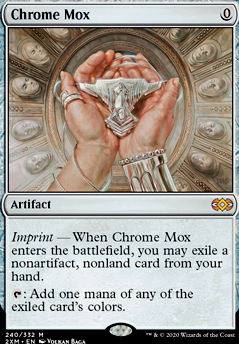 Imprint â When Chrome Mox enters the battlefield, you may exile a nonartifact, nonland card from your hand.

: Gain one mana of any of the exiled card's colours.

Iâd probably go with a different piece of ramp. Something like Mox Diamond, Chrome Mox, Carpet of Flowers, Manabond or Utopia Sprawl would be things Iâd consider.

so, make sure you put CMDR in "*'s on each side to indicate the commander. Now, as far as ways to tighten up; Smothering Tithe, Fellwar Stone, Mind Stone, and Arcane Signet all provide you were great acceleration for a modest budgey. Chrome Mox and Mox Diamond are great if you got em or like to spend a bit more. Ethersworn Canonist, Hushbringer and Aven Mindcensor help with keeping things honest and fair. lastly, Ancient Tomb and Gemstone Caverns for a bit more speed.

unwucht, Burgeoning would be my next choice due to the land synergies and with a bounce land and Omnath, Locus of Creation in play, will at least give us 4 life on our opponents turn. A reason I cut it before was because I'd be at the mercy of top decking for that fourth land to get Omnath out that I didn't see it being a faster way to getting the cast before T4.

I agree that Mox Diamond is the better option. But there are only 35 lands, I just worry about an opening hand that has 3 lands with the mox and having to discard a land for it to be in play and stressing a top deck draw of a land, if there is no other ramp. At the same time, Chrome Mox being limited to only producing mana from the identity of the imprint, could mana screw us from an early Omnath cast as well. It just boils down to which risk for reward that you want to take.

Chrome Mox is never a bad choice. (I don't own it, yet, though). With a perfect starting hand you can cast Burgeoning turn 1 and have 4 mana on start of turn 2, enabling to play Omnath and generating two landfall triggers with a fetch. Sounds sexy, as well ;)

Here is what I'm thinking. T1 land, imprint a card for Chrome Mox, cast Nature's Lore, use that Forest to cast Birds of Paradise. T2 we can cast Omnath, Locus of Creation. Way more beneficial than having Sol Ring.