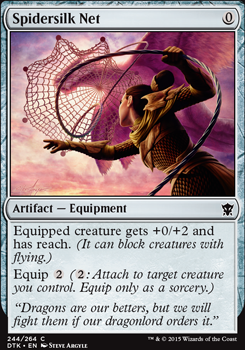 Equipped creature gets +0/+2 and has reach. (It can block creatures with flying.)

Energy Chamber was a lot more useful when I had Golem Foundry in the deck, but there isn't anything else it can buff and the +1/+1 counters are really slow, so that makes sense. I really put Solemn Simulacrum in for the card draw, and even though there is better card draw out there, it being an artifact creature made it fit in better than just a blue spell. I do sort of agree with Spidersilk Net, but it has helped me with flying coverage. I think this deck is pretty close to being completely done once I work in your suggestions.

I have a Cat deck based around Kemba as well. I recommend swapping Shield of the Realm for Shield of the Avatar. It's a little different in terms of mana cost, but the equip/mana cost is about equal all added up. It will quickly become more effective than Shield of the Realm with even 1 turn of token making.